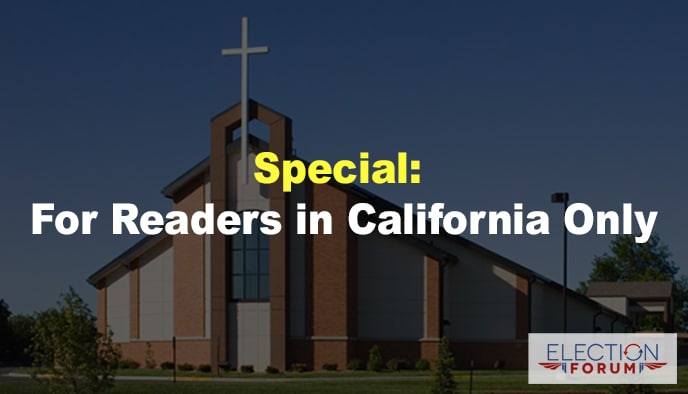 Many of our readers live in California. If you do, I’d like to talk to you about your church…

As you know, California has:

It’s worse than any other state in the union…

In fact, California is #1 nationwide in hostility to family values.

As we enter 2018, an important election is coming up. The June primary will soon be upon us, as we elect:

The only thing that can turn California around is the Church.

In 2016, Shelly and I spoke to over 48,000 people in churches during the Election Forums. This year we want to make it well over 100,000 … plus over one million using our voter guides.

Here is what’s happening … and how you can help.

We’d like you to have us speak at your church.

During the upcoming June primary, many fewer people vote than during the November election. One vote is worth about five – meaning your fellowship’s votes are more powerful.

That’s why it’s so critical that we’re able to have an Election Forum at your church this year.

Last election, we significantly expanded the number of churches where we spoke at a Sunday morning worship service. We have two worship service topics that we speak on:

After we speak on a Sunday morning, we encourage people to come back in the evening, or to an afternoon event, where we review the ballot. For example, in 2016 we spoke at the Sunday morning worship service and held a separate event at several churches, including:

Other churches had us combine the worship service message with the Election Forum. During this type of service, we put a heavier emphasis on defining the Christian worldview, and then we move into the election review. Calvary Chapel Malibu and Calvary Chapel Rancho Cucamonga had one main service with both a message and an Election Forum.

As always, these events are non-partisan and do not include endorsements.

I’d love to come to your church…

The bookings have already begun for the April – June primary season.

I’d love to talk to you about it and answer any questions you might have.

Or email me at craig@electionforum.org

3 Comments on “Special: For Readers in California Only”