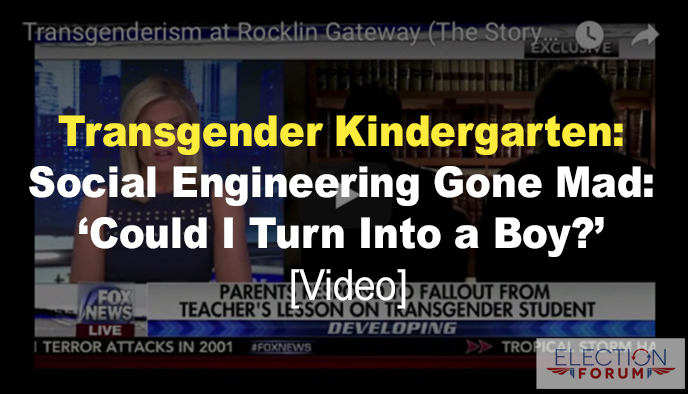 A teacher at Rocklin Gateway Academy in California had this brilliant idea.

She would talk to her small students about transgender identity.

She would then reveal their classmate who switched from being a boy to being a girl, with the student changing clothes.

She would read to them from the controversial book, “I Am Jazz,” the story of a transgender child based on the real-life experience of Jazz Jennings, now a spokesperson for trans kids.

She did this without parents’ knowledge or consent.

She also did this without the use of good judgement, either.

No wonder a little girl came home shaking, telling her parents she was afraid she could turn into a boy.

Some wondered if they could choose between being a boy or girl.

This is a form of child abuse. But in today’s culture, it’s welcome and sustained by the media, teachers and the education establishment.

She feels she was right to not only discuss transgenders to 5-year-olds, but to also promote the kindergarten boy becoming a girl to the entire class.

Teachers spoke out in support of their colleague, objecting to “banned books or book lists or selective literature” for school children.

As is the norm, anyone with a liberal progressive bent always knows what’s best for you … and your kindergarteners.

Teachers who say they want to be “Title IX” compliant are hiding behind a smokescreen.

Title IX deals with providing equal opportunities and facilities for men and women and has nothing to do with curriculum or what books you read or don’t read to students.

The school asserts that no law mandates that parents can opt out.

But no law prohibits the school from implementing a policy allowing them to opt out, either.

No surprise that the teacher has fans among trans advocates, who feel preschool is the appropriate time to tell children their biological sex is … well, meaningless.

Parents went to the school board meeting, arguing these students were too young to be involved in a gender identity discussion.

The school board’s take on all this?

That unlike sex education discussions, teachers are not required to notify parents regarding transgender discussions.

As a parent standing on biblical values, you need to be as pro-active as the progressives.

It would be a good idea to find out what is being taught in your child’s classroom.

Here are a few questions to ask the student:

Courts and activists are working on ways to require all public, private and eventually home schools to teach children the destabilizing and biblically false idea that their sex is changeable.

Canada is big on transanity, and won’t let religion get in the way of their agenda.

They have already classified the teachings of the world’s major religions (along with basic scientific facts) as punishable hate speech.

If you have a child or grandchild in a public school, know what’s going on.

Better yet, it’s time to send the child to a Christian school or home school so they won’t be exposed to damaging and dangerous indoctrination.

Two mothers from a Rocklin charter school tell troubling stories of the transgender movement invading their daughters’ classroom in this powerful 5-minute video.

In this shocking 3-minute video, a teacher defends her action to talk to kindergartners about transgender identity.

4 Comments on “Transgender Kindergarten: Social Engineering Gone Mad: ‘Could I Turn Into a Boy?’ [Videos]”