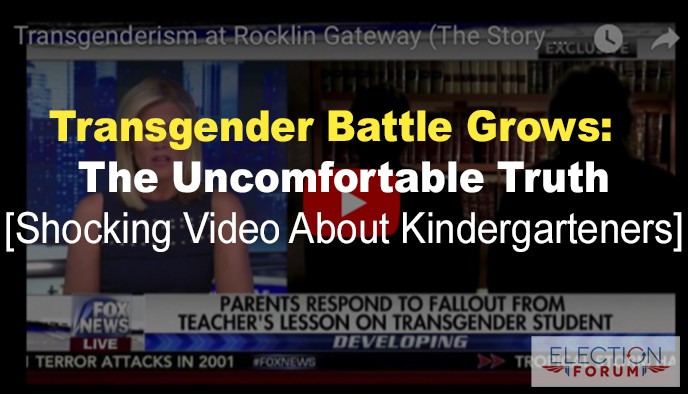 If you think you’re confused about the whole transgender issue, so are state and federal governments.

Some cities say that transgenders can’t be required to prove their gender to use a public restroom.

Others say denying transgender people the right to use a gender-identity-appropriate restroom violates their nondiscrimination laws.

How do you see this issue?

Back when she was Attorney General, Loretta Lynch equated this issue to the civil rights movement.

According to her, the desire of parents to make sure that boys stay of girls’ bathrooms is equivalent to the disgusting discrimination that forced blacks to use separate bathrooms.

Segregating bathrooms based on race is bigotry and completely irrational.

But having someone else in the bathroom with you of the opposite sex is a different matter. That is why we have men’s restrooms and women’s restrooms, so we have privacy.

According to Lynch, she wasn’t about to let someone’s discomfort prevent people from enjoying what she perceived as their full civil rights.

But the entire transgender argument is based on the claim that transgendered individuals are uncomfortable using a restroom that matches their birth gender.

So, in order to accommodate their discomfort, the federal government is now forcing the other 99.99% of the population to be uncomfortable.

Thankfully, the Trump administration has withdrawn Obama-era protections for transgender students in public schools that let them use bathrooms and facilities corresponding with their gender identity.

Transgender Issue Being Introduced to Kindergarteners

We recently wrote about A teacher at Rocklin Gateway Academy in California who had this brilliant idea.

She would talk to her small students about transgender identity.

She would then reveal their classmate who switched from being a boy to being a girl, with the student changing clothes in the classroom.

She would read to them from the controversial book, “I Am Jazz,” the story of a transgender child based on the real-life experience of Jazz Jennings, now a spokesperson for trans kids.

She did this without parents’ knowledge or consent.

If you missed our shocking story on Transgender Kindergarten: Social Engineering Gone Mad: ‘Could I Turn Into a Boy?’ CLICK HERE to read it.

Let’s look at some Scriptural Reality

As Christians, we are to walk in a renewed spirit and not in the futility of non-believers, alienated from the life of God. (Ephesians 4:17-18)

Recently, the Southern Baptist Convention came up with its own proclamation dealing with the transgender issue and has resolved to:

Watch this powerful video on the issue of parents at the Rocklin Gateway school board meeting dealing with kindergarteners being told about transgenders.

One Comment on “Transgender Battle Grows: The Uncomfortable Truth [Shocking Video About Kindergarteners]”