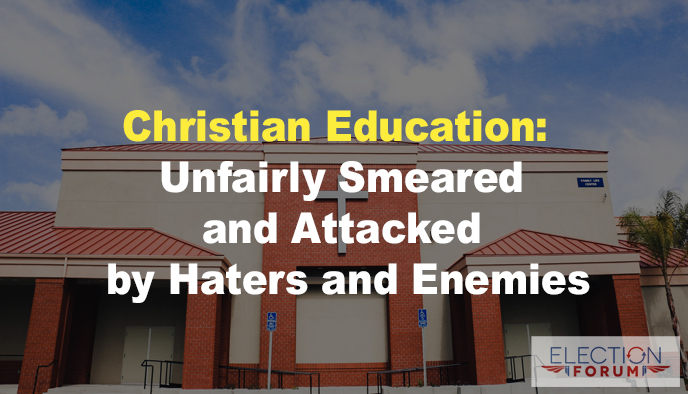 The attack on Christians sending their kids to private school and homeschooling is escalating by the elite media and school establishment.

The media, the education establishment and progressives are saying parents who don’t send their kids to public schools are racist theocrats.

They’re accusing you of being:

The author of a New York Times Op-Ed wrote that parents who abstain from public schools engage in a subversively anti-democratic behavior.

The author asserts that opposition to “government schools” is based on Confederate-era beliefs about a godless, encroaching, racist state. Bet you didn’t know that modern school choice is a bastion of Confederate ethics.

Not a shocking conclusion when you realize how progressives think: That the government can cure all of our ills, although history has proven time and again the opposite is true.

In California, one of the leading Democratic candidates for governor wants to stop homeschooling altogether.

What progressives really want is to let the government raise your children, and that is why lack of school choice is important to them.

It’s not just teaching the 3 Rs. It’s a form of secular discipleship.

This is fertile ground for the progressives to raise their own chaff among the wheat.

So, I, like many other Christians parents, disagree with the absurd progressive code of educational ethics.

But Christians are certainly not racist theocrats for wanting to enroll their children in a private Christian school or teach them Christian fundamentals through homeschooling.

It’s just another whiny complaint by the progressive media that feels its ideology is being threatened by any type of godly influence in our education system.

Is your highest devotion to God … or the state?

And that’s where I differ with progressives and education.

One Comment on “Christian Education: Unfairly Smeared and Attacked by Haters and Enemies”