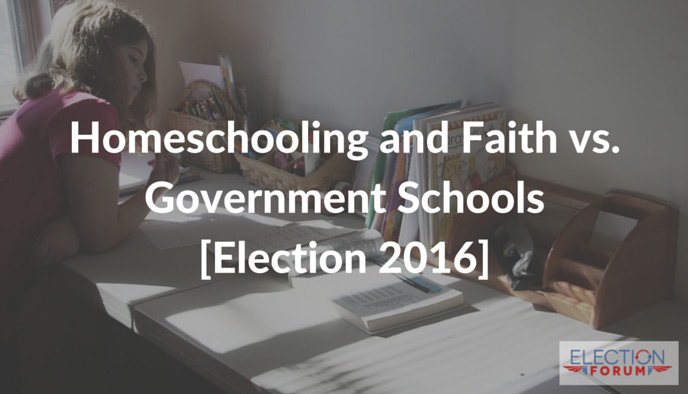 91% of parents out of the three million who homeschool their children do so for religious or moral reasons.

Children schooled at home, with strong father figures will remain connected to their faith throughout life. Another study challenged this finding, and indicated that a child’s long-term devotion depends on the parents, not their schooling.

A third study acknowledged that homeschoolers and students enrolled in public or private schools maintain the same religious views, while young adults in homeschools tended to be more devout.

The major conclusion from the studies still affirms: Parenting matters more than schooling in matters of a child’s faith and devotion.

Here is where the remaining Presidential candidates stand on homeschooling:

She is obviously a strong proponent of supporting the public government-run school system. She also does not support vouchers, tax credits, and charter schools. She believes that they drain desperately-needed resources. She is not friendly to the homeschool system and against school choice.

Wanted to award 10.2 billion dollars to federal education and HHS projects. He opposes school vouchers, tax credits, and charter schools. He does not favor homeschooling or school choice. He is a strong proponent of the government-run, public education system.

Trump seems to be a good supporter of school choice and homeschooling considering that he wishes for more competition in the education system.

Don’t forget to vote in our Election 2016 Presidential poll here.