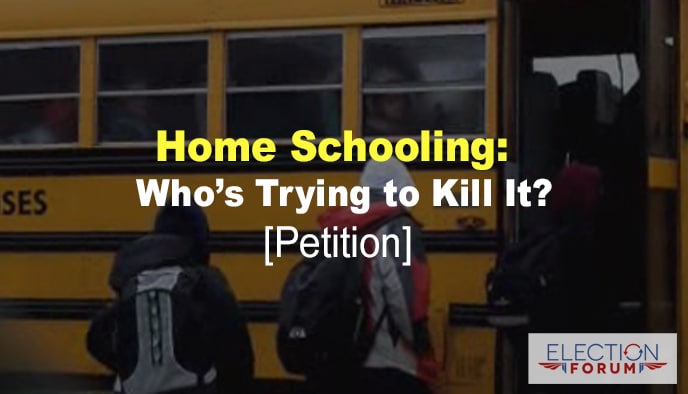 In Maryland and California, legislators are trying to pass terrible laws that will restrict freedom and violate parental rights.

Why do these politicians want to regulate – and eventually outlaw – home schooling?

Because they believe that the care and protection – and the rearing and education – of children is the duty and responsibility of the state – not parents.

After the horrible story broke of the torture inflicted by a southern California homeschool couple on their 13 children …  an activist in the progressive magazine New Republic argued that this incident was representative of a larger trend of child abuse among homeschooling parents … enabled by lax homeschooling laws!

In California, after a rally of 400 or more parents and children on the steps of the Capitol in Sacramento – and after readers of Reality Alert called and signed our petition – they softened the original bill…

The revised bill – AB 2756 – also requires homeschool “administrators” to include other information about the nature of the school … in spite of the fact that home schools have operated successfully in California for 35 years under a private school exemption program.

But that’s not all…

In an attempt to ignore the people’s voices and objections to AB 2756 … and find a way to bypass a vote to kill home schooling … California AB 2926 proposes creation of a “diverse advisory committee” to examine 3 areas of homeschooling in the state … and make recommendations to the State Board of Education for possible rulemaking and regulation.

The state education bureaucracy is able to impose rules and regulations on education in the state without requiring legislation approved by the state legislature.

The 3 areas of homeschooling to be evaluated are:

Can you see what is happening here?

Any state that wants to regulate … strangulate … and eventually terminate home schooling … will try to find ways to succeed without publicity – without allowing parents to protest publicly – and without requiring legislative approval.

It will bring about the death of home schooling … by the union-backed bureaucracy.

California may be one of the first states to use this tactic … but it won’t be the last.

We need to show massive opposition to this kind of government intrusion.

What do you think? Write me at craig@craighuey.com

One Comment on “Home Schooling: Who’s Trying to Kill It? [Petition]”