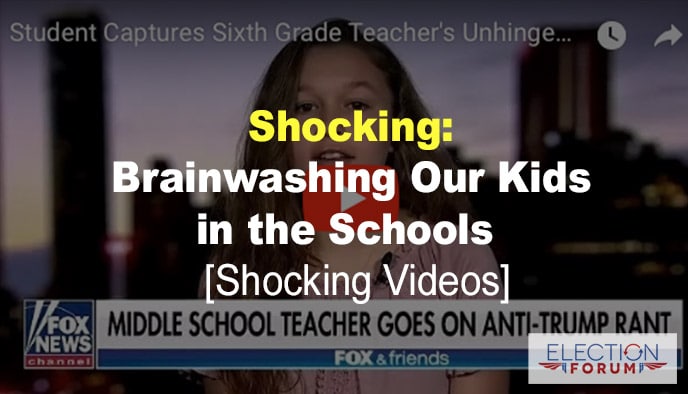 Over the years I’ve discussed how the government-run schools have been indoctrination centers … brainwashing children in progressive ideology … progressive politics … socialism … humanism … and much more.

The teachers take the lead in proselytizing students … not only in history and in government classes … but English, Science, Math and more have been weaponized against the kids, parents and Christianity…

Here are just 2 small glimpses of what is taking place in public school classrooms:

This will shock most readers … but it’s a common occurrence…

Watch the 5-minute Fox interview of the student here:

These teachers – and many others like them – are teaching public school students not to think and critique for themselves … but to follow the religious dogma of secular humanism – and its progressive political ideology.

They are following the tenets of Humanist Manifestos I and II … and the dreams of John Dunphy, who penned these words in the Jan/Feb 1983 edition of The Humanist:

“I am convinced that the battle for humankind’s future must be waged and won in the public school classroom by teachers who correctly perceive their role as the proselytizers of a new faith: a religion of humanity that recognizes the spark of what theologians call divinity in every human being. There teachers must embody the same selfless dedication of the most rabid fundamentalist preacher, for they will be ministers of another sort, utilizing a classroom instead of a pulpit to convey humanist values in whatever subject they teach, regardless of the educational level… The classroom must and will become an arena of conflict between the old and the new – the rotting corpse of Christianity, together with all its adjacent evils and misery, and the new faith of humanism…”

For these teachers, religion is progressive ideology … their goal is to educate/indoctrinate the children…

The kindergarten teacher in California who got parents upset because they weren’t told she was going to teach transgenderism to their children … had just been named Teacher of the Year.

And part of providing choices … is protecting and defending home schooling.

Please sign our petition – if you haven’t already done so – to save home schooling from being outlawed: https://www.electionforum.org/stop-the-ban-on-homeschooling/