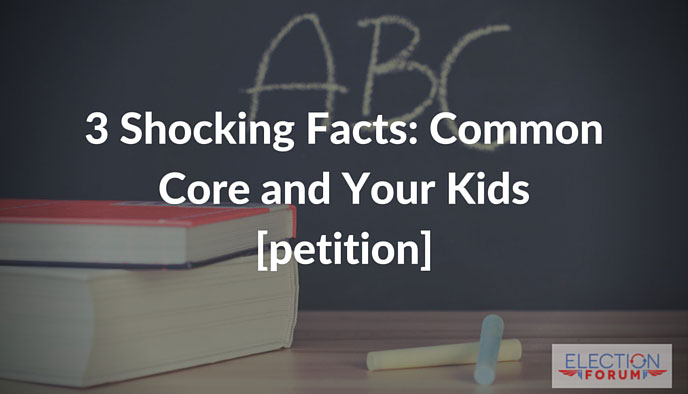 For anyone who doesn’t believe in a “one-size-fits-all” approach to education, Common Core is bad news…

For anyone who loves liberty, Common Core is bad news…

For anyone who values privacy, Common Core is bad news…

For anyone who doesn’t buy into liberal agendas and ideologies, Common Core is bad news…

For anyone who values high achievement, Common Core is bad news…

Here are three things you should know about Common Core:

Common Core standards were written and adopted without public debate or even public knowledge.

Common Core takes all control away from local school districts and states: states cannot reform the standards because they’re copyrighted, and they are only allowed to add 15% of requirements to Common Core’s standards.

It also takes away the liberties and rights of parents and students.

Parents who want to give their kids a different education – at a Christian private school or perhaps through homeschooling – are still caught in the traps of mandatory Common Core testing.

All schools and students will be assessed by Common Core tests – so if they want to receive funds, graduate high school or get into college, they will have to adopt “Common Core aligned” curriculum so they can do well enough on the tests.

And, when states adopted Common Core, they agreed that all student data collected at the state level will be given to the U.S. Department of Education.

Math: Dr. Milgram, Stanford Emeritus Professor of Math and the only mathematician on the Common Core Validation Committee, refused to sign off on the standards.

The math standards use new methods that are not supported by any research and contradict those of high-achieving countries.

Students and parents are already bewildered and frustrated: students can’t grasp these methods, and parents can’t help their kids.

English: The only English scholar on the Validation Committee also refused to sign off on the English standards.

(1) In AP U.S. history, the U.S. Constitution is undermined, negative parts of American history are emphasized at the expense of the good parts, and American principles aren’t taught.

Example: it recommends dramatic re-enactments such as the whipping of a 6 month pregnant slave face down, belly in a hole to protect future “property.”

(2) The science textbooks are filled with unscientific, environmentalist propaganda.

Here is just one aspect of the Common Core tests that is problematic and unfair.

Though there are many problems with the tests’ implementation, this one is part of its design.

The tests are not standardized.

And watch out for upcoming articles on Common Core. We’ll explore these topics more in depth, show the presidential candidates’ positions on Common Core, and more.