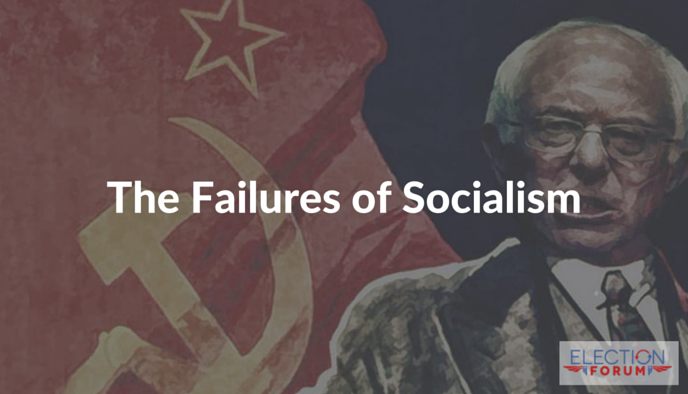 All are advocating different forms of socialism.

But socialism by its very nature creates poverty, stagnation, and oppression.

2. Socialism requires an inefficient and ineffective bureaucracy. Here are a few examples:

a. The United States Post Office faces a crushing $102 billion debt and benefit liability, with ongoing discussions about reducing days of service to five—even three days.

b. Veterans Administration Hospitals: patients have died on secret waiting lists. Administrators have not only not been held accountable, but oftentimes get raises and promotions.

c. Department of Education: states are required to comply with overbearing mandates and regulations in order to receive federal funding.

3. Socialism kills innovation and progress. There’s a new cancer drug just announced that would never have come out if not for free enterprise and the profit motive. The investors and scientists will see as much as $10 billion in sales of this drug. It will make some people rich, and save many lives. These innovations in technology, drugs, and inventions require a free people, not shackled by bureaucracy. Can you imagine a politician, a bureaucrat—the DMV, for example—inventing anything? They take, but they don’t create.

4. Socialism relies on a federal top-down approach that can’t beat the free market. A free economy is self-correcting, and costs nothing more and requires no further intervention. Stimulus dollars just create billions of dollars of waste, a massive government failure.

5. Socialism creates redistribution of wealth rather than creating more wealth, along with innovation and jobs. Socialists think of the economy as a pie, and central planners have to divide up what already exists. In a free economy, the pie gets larger, so that even the poorest become richer.

6. Socialism has a history of failure: Nazism (National Socialism) in Germany; Fascism in Italy; Communism in Russia. Power corrupts, and absolute power corrupts absolutely. The genius of the United States Constitution prevents the failure of centralized power, which creates coercion and dictatorship. Nowhere in recorded history does democratic socialism not lead to political and economic distortions.

Consider also Venezuela, where socialist policies have led to rationing of food and water, rationing of toiletries and other basic necessities, devaluation of the nation’s currency, massive closures of small businesses, and the flight of investment and capital out of the country.

Zika mosquitoes are socialism’s gift to the world, because Venezuela was so bankrupt, that the country could not pay its doctors or provide a necessary infrastructure to preserve and protect the health of the country’s inhabitants.

7. Bernie and Hillary want to grow the government, and find all their solutions in the federal government. They ignore the intellectual and economic bankruptcy of socialism. Instead, they want the following:

As you can see, socialism sets everyone back economically, reduces freedom of choice and individual liberty.

Learn something new? Let me know! Email me at craig@electionforum.org

2 Comments on “The Failures of Socialism”