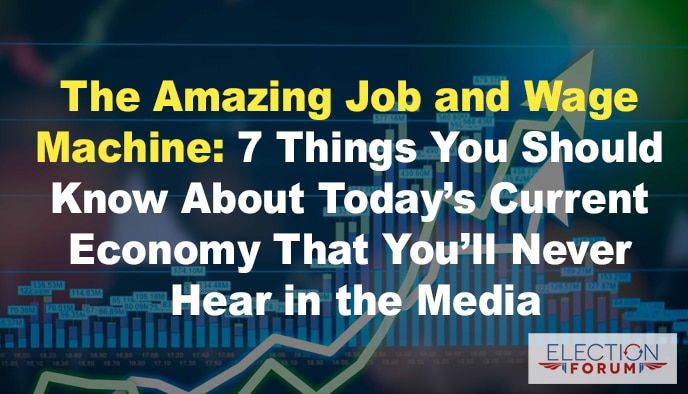 There’s been an incredible turnaround in the economy since the beginning of 2017. The secret to this growth is what President Trump and the Republican Congress have done:

They have dramatically lowered taxes.

They have dramatically decreased regulations.

It was the taxes and regulations that killed the economy under President Obama.

Here are 7 things you should know about today’s current economy that you’ll never hear in the media:

I have long said that our economy can grow between 4-6% … and now, it’s happening.

Wages are growing at a rate of 10 times the rate of what they have done over the last 10 years.

… and marks one of the best quarters in the past decade.

Money stashed overseas to be protected from high corporate tax rates has been returned. The Bureau of Economic Analysis (BEA) reported a total of $3.5 billion – for an annual rate of $1.2 trillion and far more than the $35 billion from the year before.

The result is more growth, jobs and confidence.

Trump’s tax cuts have boosted job growth, and unemployment claims have hit all-time lows. People are getting paid more, even as 6 million high-skilled jobs are unable to be filled.

And the black unemployment rate is at an historic low.

The media says that this data is “unexpected,” but the cause is clear: Trump’s tax cuts have boosted growth.

Under Obama, we experienced one of the worst economies in American history.

In 8 years, Obama never produced economic growth of more than 2.6%. That had not happened since before WWII.

He defended this low rate, saying that was the new normal. The media and progressive politicians laughed at the idea that anyone could do any better. They said that the days of 3% growth were over.

What caused this bad economic growth under Obama?

What was difference with President Trump?

And the amount of reductions in regulations has been extraordinary.

The next step for even greater economic growth?

Socialism is representative of high taxes and high regulation. The free market is indicative of low taxes and little regulation. That’s all the difference between economic failure and great prosperity.

3 Comments on “The Amazing Job and Wage Machine: 7 Things You Should Know About Today’s Current Economy That You’ll Never Hear in the Media”