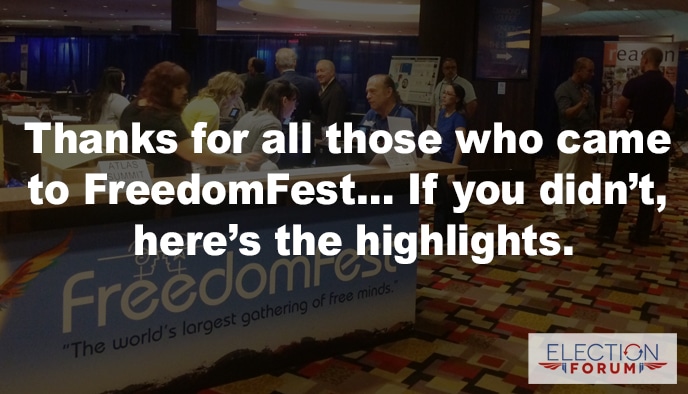 I’ve been a speaker at every FreedomFest since it began over 10 years ago.

This one had to be the best event yet.

The energy and enthusiasm of the audience were intense.

And the speakers were great.

Steve Forbes and Grover Norquist engaged people on the economy and politics.

For examples, Grover Norquist declared to the audience that he believes President Trump will sign an executive order indexing capital gains to inflation. This will further create a booming economy, including stocks.

I introduced my new book, The Deep State: 15 Surprising Dangers You Should Know to the audience. It was a standing room-only crowd. The room was so packed that people stood outside just to listen. I explained things most people don’t understand about the Deep State, including the nature of bureaucracy and how the Deep State leads to the evils of socialism and stateism.

I also gave a talk on How to Grow Your Company Under Trump: 23 New Trends in Marketing & Advertising. Business owners as well as those involved in nonprofits came from all over the world to learn about the newest techniques in marketing, and how to market in today’s world to raise funds and mobilize politics and society.

I was also the moderator on a panel session called Innovate! How Technology Breaks Open Our World and Our Freedom, where Zafar Khan spoke about new ways of privacy, Joel Stern spoke on new business structures and Sean Worthington spoke on what’s next with cryptocurrencies and blockchain technologies. I spoke about the amazing advances in advanced database modeling and digital marketing.

Mark Skousen (the organizer of the event) and his team did a fabulous job for close to 2,000 people, the largest turnout they have ever received. There were also over 200 speakers.

The content of this year’s FreedomFest was invaluable, whether you’re a business owner, investor, or interested in politics, economics and philosophy.

I encourage you to go here to be able to order a copy of any of the speeches:

And if you’d like a special discount for next year’s show, you can go here:

I especially want to thank my subscribers who came. I had subscribers from Direct Marketing Update, Reality Alert and Huey Report  who came up to me to say hi. Many asked me to sign their books – either The Deep State: 15 Surprising Dangers You Should Know or 23 Equity Crowdfunding Secrets to Raising Capital. It was so great meet and talk to you. And thank you for all the encouragement.

Incidentally I was co-signing my book at the book signing with Bob Poole. I’ve known Bob since he first started Reason Magazine. I helped him with his marketing and helped him generate initial funding for the organization. His book Rethinking America’s Highways: A 21st-Century Vision for Better Infrastructure is an awesome read. And it was great to see him again.

An event like this shows you that there are many people working to fight for freedom, to roll back collectivism and to fight stateism.