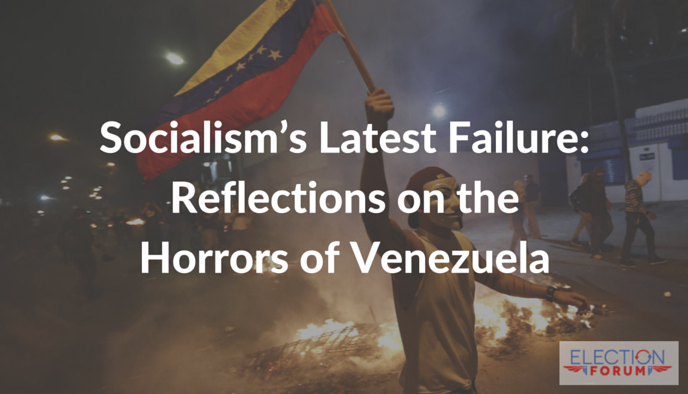 Bernie Sanders, Hillary Clinton, and Barack Obama have advocated for more socialism, and made it a moral imperative called “social justice”.

It’s really about pitting class against class … the haves v. the have nots … them vs. us … the rich vs. the poor.

Their promises to give something for nothing to everyone ignore economic reality and morality. No government bureaucrat should force their will on you or anyone else to make choices—good or bad.

Socialism at its core is:

All of this wrong.

And Venezuela is experiencing the consequences of socialism.

The politicians promised free healthcare … but now there are no doctors or hospitals.

The politicians promised that the nationalization (the government take-over) of businesses would stop high prices … but gone are the entrepreneurs, business people, and foreign investments.

The politicians promised free electricity … but now there are electric outages everywhere.

The politicians promised equality … but most of the Venezuelan people are poor and getting poorer, except for the politicians and bureaucrats. For example, the President’s daughter is getting over $4 billion.

The politicians promised a “living wage” … and now only those connected to the government can afford to live.

The politicians promised freedom … but now opposition voters are silenced.

The politicians promised economic prosperity … and now there is economic chaos with a 700% inflation rate and $130 billion in foreign debt.

So, what does Venezuela have in common with other socialist countries?

The politicians become rich … control everything.

Central planning of an economy fails every time because it fails to recognize that free people help build wealth.

Central planning inevitably uses the force of government to grow itself, suppress opposition, become coercive, and basically steal from those who work to give to those who don’t.

Share with me your thoughts. Email me at craig@electionforum.org

2 Comments on “Socialism’s Latest Failure: Reflections on the Horrors of Venezuela”