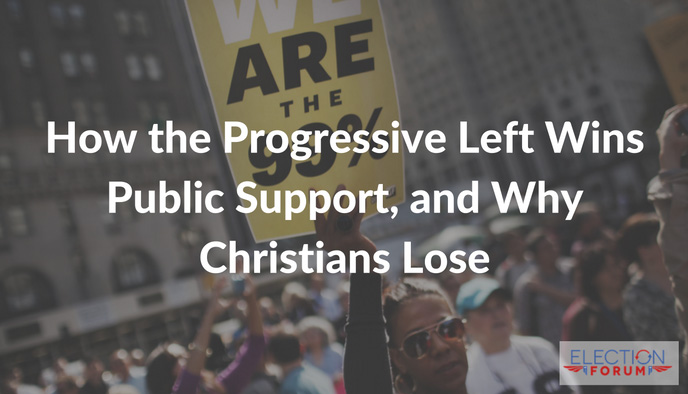 How do they do it?

I have written and spoken about their use of the new breakthroughs in marketing and advertising. They understand these techniques. Christians and conservatives do not.

One aspect of their ability to achieve these objectives—evil, destructive, oppressive—is what I call in my marketing talks “friendly persuasion”.

One of the keys to “friendly persuasion” is testimonials. They are a proven way to command attention, and help persuade and convince people to respond and act.

You see them on infomercials and most marketing materials.

Christians often give their testimonies privately and publicly. That’s a form of a testimonial

People’s personal experience is powerful and persuasive and the progressive left has learned how to use this form of friendly persuasion to achieve their objectives.

Gun-rights supporters have great stories about people who were saved because of gun ownership.

But you never hear about it when gun-rights advocates make their case. The only time there are stories for gun rights is when you read news stories of businesses and homeowners protecting themselves saving lives by having their firearms to deter an intruder.

When will we hear more stories about these people:

There are some exceptions, At the Republican Convention, we saw the parents of victims of illegal aliens, who should have been jailed then deported. Those stories are powerful and effective, but they are not enough.

But the Left sets up an army of protesters who want more money to live on.

Those who want to help entry-level workers, but recognize the harms done by a minimum wage hike, used logic, reasons, and facts. They lost.

Why didn’t they seek out business owners struggling to make ends meet? What about employees fired because they were laid off?

They are portrayed as the victims, with tears in their eyes, a minority which is unfairly discriminated against. And the Christian business owners look mean-hearted.

We don’t see the tears of the woman in Seattle, Washington who is about to lose her home and her IRA because she stood firm. We don’t see the baker who loses his business. These accounts all convey powerful emotions that can influence others.

Books, magazines, TV series, movies, all have stories and testimonials.

Ads. TV news interviews. The press. All have personal testimonials.

This sudden transformation of thought was articulated and strongly promoted by President Obama based upon other people’s testimonials. Pastors were silenced, with huge activism by individuals displaying personal, emotional testimonies.

You don’t see parents, whose kids have been harmed by homosexual conduct. You don’t see men and women who talk about they complement one another in natural marriage.

The Left keeps hammer this basic theme: They display people whom we like, who awaken our compassion, and who are standing up to “old” beliefs.

It’s not about right or wrong. Good or bad. Best or worst.

It’s all about personal testimonies.

The pro-marriage proponents talked about culture, religion, history, and biology.

You don’t see parents are kids hurt by homosexual conduct.

You never saw testimonies from ex-gays or from homosexuals who believe in marriage between a man and a woman.

Marketing truth requires friendly persuasion, or we will continue to lose.

9 Comments on “How the Progressive Left Wins Public Support, and Why Christians Lose”