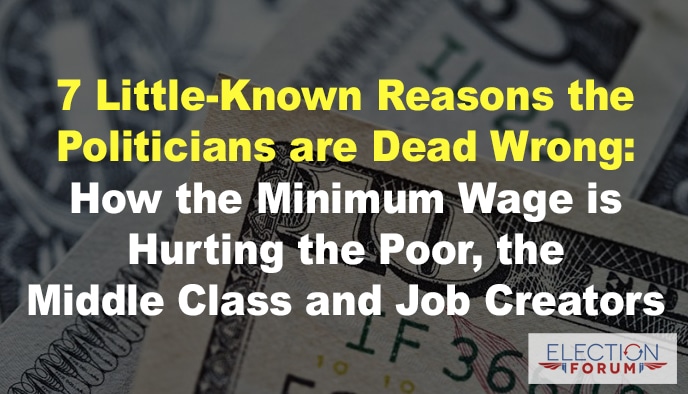 It’s a constant, loud cry to raise the minimum wage…

But there are 7 little-known reasons they are dead wrong.

Raising the minimum wage is the worst possible thing you can do for the poor … and for everyone.

Because economic actions always have both intended and unintended economic consequences…

As a business owner and a student of economics, I can tell you that most people don’t see the unintended consequences.

Here are 7 unintended consequences of the minimum wage hikes that are hurting then poor … the middle class … and small businesses:

When wages are increased arbitrarily … without a corresponding increase in productivity … or increase in the value of the service performed … some employees will be let go for being too expensive to keep on the payroll.

A raise in the minimum wage never creates jobs … it always reduces employment.

The ones hurt the most are those starting out – without job skills or specific job training and education.

In a free market economy, wage increases are based on increased productivity, increased skills or knowledge … or some other increase in value to one’s employer.

Minimum-wage employees will be considered by their employers to be overpaid.

A raise in the minimum wage reduces pay increases.

If a company wants to remain in business, it must continue to earn a reasonable profit even when the cost of overhead increases.

That’s why you see so many businesses raising prices today.

McDonalds and other restaurants – as well as retail outlets – are experimenting with automated ordering and payment systems.

With the minimum wage ratcheting higher in steady increments, it’s only a matter of time until all human cashiers are eliminated from the retail sector.

A minimum wage hike increases the acceleration of automation – causing more jobs to be lost.

So far, President Trump has failed to step up…

The budget he submitted last year proposed to shave only 1% from entitlement spending that’s growing by 6% every year.

Social Security and Medicare spending – the 2 largest entitlement programs – will exceed payroll taxes and premium payments this year by $420 billion.

Marginal workers are people who – because of either physical or mental challenges … or a combination of both – have limited job skills … and lower productivity than those with no limitations.

These workers have more opportunities and a much higher chance of being offered a job in a low-minimum-wage job market.

When the minimum wage is forced higher by law, companies can no longer justify the expense of hiring marginal workers.

All of the unintended consequences of a high minimum wage combine together to produce a stagnant economy with fewer opportunities for cross-training and for job transfers.

Employees are much more likely to become “locked in” to their initial job – and remain in it – for fear of not being able to find a new job were they to move … or were they to seek to capitalize on their work experience by quitting their current job and looking for a higher-paying job with another company.

4 Comments on “7 Little-Known Reasons the Politicians are Dead Wrong: How the Minimum Wage is Hurting the Poor, the Middle Class and Job Creators”