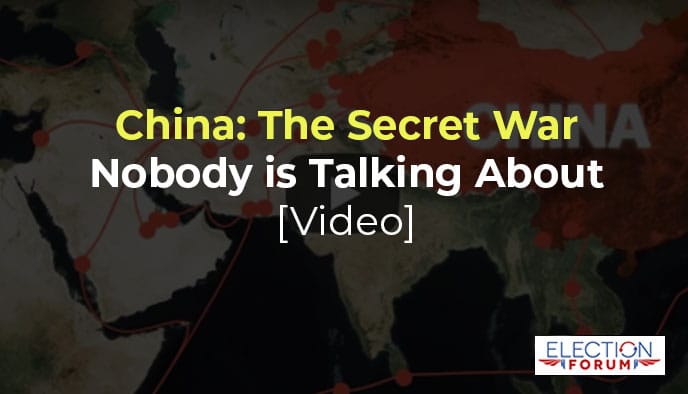 Communist China is at war with America … and with every other country that opposes its unfair economic strategies and tactics.

Economically, the Chinese government intends to dominate and rule the world.

It is dead serious about this … and very few Americans – with the exception of President Trump and a very small number of conservative economic experts – are taking the Chinese seriously.

How they intend to surpass the economic power of the U.S.:

It is expanding its influence around the globe by its presence in:

Part of its expansion strategy is propaganda designed to promote the kind of socialism and communism that dominates every aspect of Chinese culture.

It’s becoming the most totalitarian, the most authoritarian, and the most controlling collectivist state the world has ever seen.

Through technology, China is trying to manipulate people’s thoughts, beliefs, and behaviors.

By implementing a “social credit system” that ranks every person according to his or her behavior.

The system is currently being tested on millions … and will be fully implemented across the enormous Chinese population by 2020.

Militarily, China is establishing itself as the dominate player in Asia…

It has made it abundantly clear that it intends to invade and take over Taiwan in the future.

It is seeking to gradually take control of international waterways and ports.

China is already claiming sovereignty over the South China Sea and the East China Sea.

Pentagon and intelligence agency reports indicate that China intends to be the most powerful superpower on the face of the earth by 2049.

China is also infamous for its forced abortions, control of the press, persecution of Christians and Muslims … and so much more.

China’s leaders are smart. They are using propaganda not just in schools and in communities on the Chinese continent … but worldwide.

When Shelly and I were in Cuba, Chinese propaganda was there. When we were in Columbia, we were shocked at how prevalent its influence was there also.

Even in the Bahamas, we found that they have influenced the government, the economy, and even the schools.

Here in the United States, China intelligence is dominating and starting to have inroads not only in colleges, but other schools as well.

2 Comments on “China: The Secret War Nobody is Talking About [Video]”