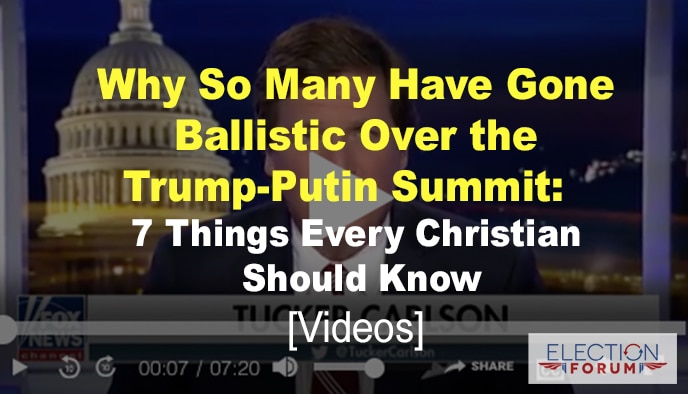 And the media and Trump opponents went ballistic.

After the 2-hour private meeting –with only translators present – a joint news conference with Trump and Putin took place in Helsinki.

President Trump issued some terrible sound bites during that news conference … and the media swooped in for the kill.

He later clarified some of his statements … but there was no forgiveness.

Here are 7 things you should know about Trump-Russia-Media-Intelligence Agency relationships:

The president sometimes is guilty of:

But the media shows no mercy on President Trump.

They cherry-pick and jump on these “mistakes”… making them the major news stories instead of focusing on the more important background events.

The slander against Trump is historic:

To promote world peace and stability, the U.S. must seek to find common ground where possible … and that’s what President Trump has been doing.

Because he talks to these leaders does not mean he accepts or condones their policies.

President Trump is a salesman and deal-maker … he’s not approaching foreign policy in a bureaucratic, diplomatic style – which has failed miserably in the past 30 years at least…

He’s doing things differently … according to his own personality … and the career politicians and media elites can’t accept that.

He’s trying to manipulate countries around the world – including the U.S.

And he has nuclear weapons…

No question Putin is a bad player … and President Trump has never said he’s not.

But why the singular focus on Russia when China is just as evil … if not worse:

But the media – and opponents of Trump – are silent on China.

But now – because of President Trump – they hate Putin more than they ever hated his predecessors in the Soviet Union.

And where is their outcry over the repressive regimes in Saudi Arabia … or Iran … or China?

The media, establishment politicians and the Deep State deny political bias and inaccuracy in our intelligence agencies.

It’s not even possible anymore to have a discussion about past intelligence agency failures … or to question current “intelligence community assessments.”

If you do, you are labeled “un-American” – and if you are President of the United States and you do it a press conference with a foreign leader, you are “treasonous.”

It has been repeated ad nauseum since the final Hillary Clinton-Donald Trump presidential debate during the 2016 campaign that “17 intelligence agencies” concluded that the Russian government was responsible for the hacking of the DNC server and John Podesta’s emails.

After Donald Trump stunned the world by winning the election, the “intelligence community” added motive to their claim of Russian hacking…

They did it to “help Trump win,” the intelligence agency heads and the politicians and the media repeat over and over … and over again.

Everyone now assumes this to be true because it’s been repeated so many times.

But no one can know the motive for a crime unless:

None of these requirements to prove motive have been fulfilled. Motive is simply assumed because the “intelligence community” said so.

And to question what we are told by the intelligence community is tantamount to being a traitor to the U.S. government.

It makes no difference that the leaders of the major U.S. intelligence agencies were partisan progressives and socialists who hated Donald Trump … and wanted to discredit and delegitimize the results of the 2016 election.

They have actually done more to “meddle” in the U.S. election process and attack our democracy than the Russians ever could have dreamed of…

So, while Trump has said he trusts the rank-and-file intelligence agents that do the hard work of gathering bits and pieces of information … he questions the integrity of the leadership that exhibits hatred and bias…

The leadership and some of the key intelligence officers have been instrumental in the Deep State weaponization of intelligence agents to be partisan and political.

And don’t forget about the intelligence agency failure in Iraq in 2003 … when there was supposedly overwhelming evidence of weapons of mass destruction in Iraq – which turned out to be not true.

The Obama administration was extremely friendly to the Russian government:

In contrast, consider what President Trump has done:

While the media’s and intelligence community’s focus has always been on Russian attempts to hack into DNC servers, they also attempted to hack into GOP servers during the 2016 election cycle.

Senator Marco Rubio (R-FL) believes Russia didn’t care who won the 2016 presidential election … they wanted to weaken the next U.S. president – and the U.S as a whole – by weakening our government.

Here are some things Congress should be doing to prevent future meddling by Russia and other foreign powers:

Watch this interview of Professor Stephen Cohen – one of America’s most preeminent Russia scholars – on why President Trump was so viciously attacked over Russia (5 minutes):

2 Comments on “Why So Many Have Gone Ballistic Over the Trump-Putin Summit: 7 Things Every Christian Should Know [Videos]”