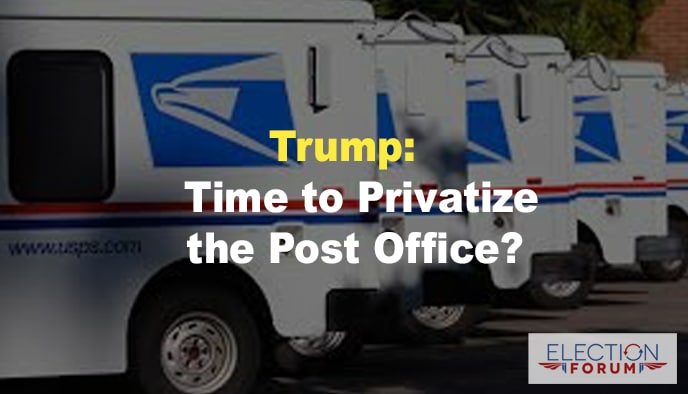 Now, President Trump is taking action against the incompetency and wastefulness of the USPS, proposing to privatize the post office in a massive restructuring.

The proposal was made in a recent report that recommends that the USPS is returned to a “sustainable business model” – in other words, that the post office would no longer function like a self-serving bureaucracy that wastes your taxpayer dollars.

Instead, it would function more like a private business – promoting innovation, profits and healthy competition.

The report also revealed that the President has created a task force to help promote postal reform, keeping the USPS accountable.

Here are 10 powerful reasons that postal reform is desperately needed…and that the President’s proposal and task force are two steps in the right direction.

That adds up to a total loss of $1.8 billion over a 6-month period…

If the USPS was privatized, it wouldn’t be able to keep sinking into debt without going bankrupt – it would be forced to change its business practices in order to stay profitable.

But instead, you and I – and all taxpayers – must continue to bail it out with our taxdollars.

But government agencies don’t have to operate profitably.

Bureaucrats don’t care if they lose money because they know taxpayers will always bail them out … whether they want to or not.

Their government-mandated business model is unsustainable.

All they care about is collecting their paychecks and keeping their cushy taxpayer-funded benefits.

Take a look at these shipping rates for domestic U.S. delivery of a standard 2-pound box-shaped package:

That’s because Congress has prohibited USPS from setting its parcel prices below its costs … but the formula Congress established in 2006 for calculating the share of infrastructure costs associated with package delivery is wrong – it doesn’t adjust for the fact that package delivery is a much larger share of USPS’s business in 2018 than it was 12 years ago.

Translation: USPS package revenue covers its direct costs … but not its overhead costs.

Here’s an example of how this works:

I own an advertising agency…

If I charge – let’s say – $7,000 for an advertising service, I could say it was profitable because the revenue would cover my direct costs for copy and artwork. But it wouldn’t cover my utilities, rent, salaries, insurance and other overhead costs.

So, if I operated my business that way, I’d lose money every year … just like the USPS.

But unlike the USPS, I’d be forced out of business … or be forced to declare bankruptcy.

On the other hand, if I charge $20,000 for the same advertising service, I not only cover all my indirect costs as well as my direct costs … but I have profits left over to invest in new technology and to grow my business.

Because the USPS currently functions like a bureaucracy, it doesn’t respond to market forces. But if the post office was privatized, it would be forced to price its package delivery service in the same way as a business such as FedEx or UPS does…

And it would be forced to stop giving Amazon an even greater discount than what it’s giving to all package delivery across the board.

An independent study conducted by Citigroup last year found that USPS should be charging $1.46 more per package just to break even with actual costs.

If USPS had charged Amazon just the amount per package that covers its true costs, the additional revenue from the 480 million packages Amazon shipped through USPS would have wiped out the $1.3 billion loss for the last fiscal quarter.

With Trump’s proposal to privatize, this might actually become a reality – and the post office might rise out of debt and stop doling out special favors.

A private business must have an efficient team to run well. But the USPS has virtually no management team right now.

The Postal Board of Governors has the following primary responsibilities:

President Trump has nominated three board members – including the agency’s former inspector general – but the seats are still vacant.

Senator Bernie Sanders (I-VT) has blocked nominees because of the postal unions – and because he believes “they would slash jobs and outsource one of America’s oldest institutions to private companies.”

No new governor has been approved by Congress since 2010 … leaving the USPS to make decisions in its own self-interest.

In fact, the Board of Governors has taken full advantage of this circumstance…

Without a quorum, the Board established three new rules out of thin air:

What the post office desperately needs is oversight and accountability – required in any efficient business.

Fact #5: The postal bureaucracy is archaic, resistant to change.

The USPS makes decisions not based on market need and business reality … but based on what pleases bureaucrats, unions, and politicians.

For example, in 2014 the Postal Service set up an agreement with Staples that allowed its employees to operate post office desks inside Staples’ retail outlets.

This was a great business decision, and convenient and popular with Staples customers … but not with the American Postal Workers Union.

The union immediately began staging protests at selected Staples outlets … and eventually succeeded in obtaining an order in 2016 by a National Labor Relations Board Administrative Law Judge to discontinue the program.

Fact #6: The Postal Service is currently a government-protected monopoly that would benefit from healthy competition.

Only choice and competition can create efficiency and progress.

If the auto industry, the computer industry – including email and texting – and eye surgery were bureaucratic monopolies, their products would be very expensive, second-rate, and immune to positive change.

If the horse and the buggy industry were protected the way the Postal Service is, we’d be riding horses instead of driving high-powered cars…

We’d have giant computers like in the 1960s, not iPhones in every home…

We’d have government-approved glasses, not Lasik.

Years ago, it tried to stop UPS, FedEx, and other private delivery services…

Fortunately for businesses and consumers, the government monopoly failed.

Then the USPS tried to control email … but fortunately for businesses and the consumer, they failed.

With privatization, the USPS would no longer get to function like a government monopoly…and other private mail services could offer healthy competition and greater consumer choice.

And nearly half of them violate cleanliness and maintenance guidelines.

Many buildings have been found to be infested with mold, bugs, or rodents … and even have foliage growing inside the facility.

Plus, most post offices do not even maintain a customer complaint log … meaning that most issues go unresolved and unacknowledged.

As a business, the USPS would rise out of debt … see a boost in profits …. and finally repair its offices and invest in efficient and streamlined facilities and equipment.

Fact #8: Postal vehicles are falling apart – and now the USPS has responded with a pricey, “eco-friendly” and wasteful “solution.”

More than half of all postal vehicles are more than 20 years old, and need to be replaced desperately.

But despite their massive debt, the post office has decided to purchase massively expensive but “green” hybrid vehicles.

Even with better mileage, hybrid vehicles are more expensive. And the USPS is planning on spending $6 billion for these new cars in the next 10 years – sinking them further into debt.

A private business could never make this sort of a business decision. But a bureaucrat – removed from reality and totally unaccountable to spending – doesn’t make decisions to benefit taxpayers. They make decisions to advance their own self-interest and advance a political agenda.

Fact #9: The Post Service shouldn’t be controlled by Congress.

Much of the post office’s dysfunction is caused by the United States Senate and House.

Individual members of Congress prevent the free market from working:

They prevent the closure of inefficient postal facilities.

They prevent the hiring of good people.

They block implementation of technical improvements.

They act to please their union donors rather than to benefit the American people.

This new proposal – and the recommendations made by Trump’s task force – will surely see pushback from members of Congress who want to push a socialist agenda.

Fact #10: The Postal Service wants to increase postal rates…bad for thousands of businesses.

The Postal Service’s solution to its massive debt is to hike rates 34-41% over the next 5 years – with or without approval from Congress or from the Postal Board of Governors.

These price hikes aren’t permitted under the 2006 Postal Accountability and Enhancement Act – the major law that governs the Postal Service.

This colossal increase in prices will hurt thousands of small and large businesses that rely on direct mail.

It will also hurt magazines and newspapers.

The last postal rate hike was a huge job killer—and the post office, the consumer and business were the victims…

Many direct mailers drastically cut back on their efforts to obtain new customers – to the tune of $181 million last year.

My direct-mail clients of my advertising agency won’t send as much direct mail – and some won’t send any – with the coming hike.

The clients’ prospects won’t get their special offers. They’ll lose a great product.

And instead of the Postal Service generating increased revenue, it will generate less.

With privatization, the USPS won’t be able to make arbitrary and senseless price hikes – instead they will be forced to respond to competition.

The solution to the USPS mess is privatization.

The USPS has responded to the proposal for postal reform, saying that “potential reforms” must “fully analyze the interests of America’s consumers and businesses.”

That’s a step in the right direction – but they must be willing to radically change.

Privatization could transform the post office…help get it out of debt…and ultimately benefit taxpayers and consumers.

Here are further steps that President Trump must make that will help end the appalling dysfunction of the USPS…and protect taxpayers like you and I from paying for it:

Contact your representatives right now and tell them you support the proposed privatization of the USPS!