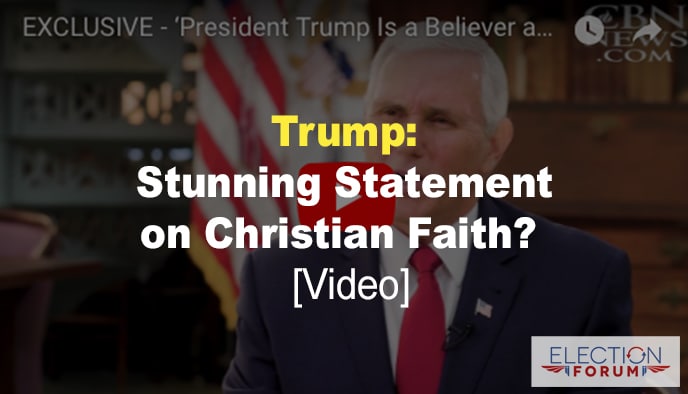 “What is going on – spiritually – at the White House?” asked CBN commentator David Brody. Mike Pence replied, “Let me be clear: President Trump is a believer, and so am I.”

When I first met Mike Pence, he was still a congressman. He said to me, “I’m a Christian, a conservative and a Republican, in that order.”

Pence is a man of prayer… He always prays with others, including the president.

He also sponsors a weekly Bible study in the White House, attended by many cabinet secretaries, and led by Ralph Drollinger, a pastor and retired pro basketball player who played for the UCLA Bruins under legendary coach John Wooden.

What all of this means:

It’s important to keep in mind that when one becomes a Christian later in life, outward changes in behavior are usually slow to become noticeable.

Trump wasn’t raised in a Christian environment… He has 70 years of pride, arrogance, non-Christian language and bad habits to overcome.

Think of the conversion of Saul in the book of Acts. Many disciples of Jesus were skeptical that he had really become a believer due to his violent past behavior.

Saul spent 14 years in the Arabian desert while God gradually changed him into the Apostle Paul.