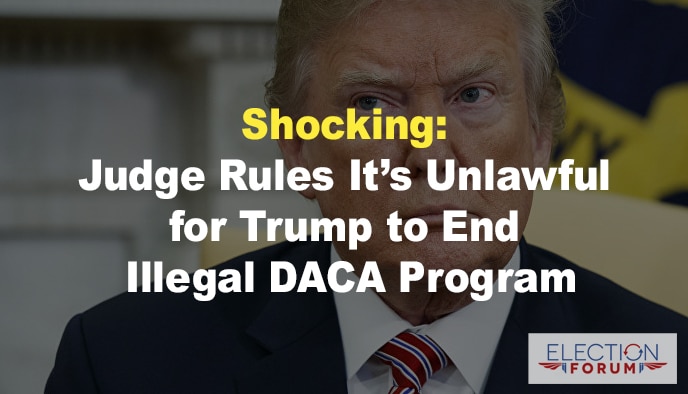 When a U.S. president and U.S. district court judges make rules based on their own opinions and preferences – not based on existing U.S. law – what’s the point of having laws?

After repeatedly – and rightly – stating that it would be unconstitutional – and therefore illegal – for him to unilaterally change immigration law, President Obama – by Executive Order – created the DACA (Deferred Action for Childhood Arrivals) program on June 15, 2012.

It was an unconstitutional abuse of executive power over the legislative authority of Congress.

It was supposed to be a temporary program…

Now that President Trump wants to phase out the program, a U.S. district court judge has ruled it would be unlawful for him to do so.

The judge is saying President Trump doesn’t have the executive authority to rescind an illegal executive order.

The hypocrisy and insanity of progressive judges knows no bounds…

It’s more important than ever to have judges that will follow the U.S. Constitution and existing laws … and that do not legislate from the bench.

This is why the June primary and the November mid-term elections this year are so very important:

Your vote is important!

If you live in California, please consult our voting guide for the statewide offices and for the Superior Court judges in you county: https://www.electionforum.org/california-June-2018-voter-recommendations/