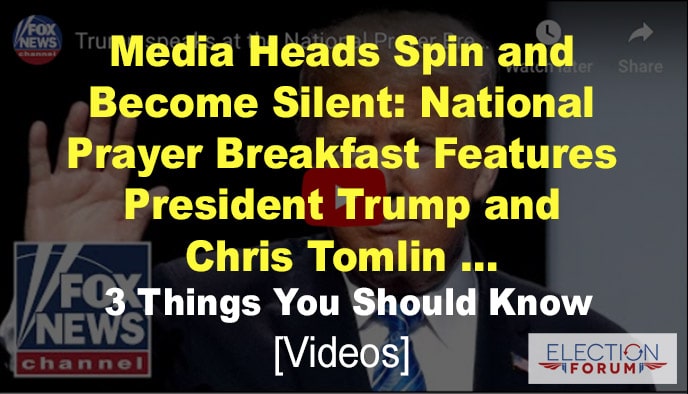 Then mockery and criticism…

This year, reaction to the National Prayer Breakfast by the biased social media, socialist Democrats and liberal theologians was sad – and misplaced.

Members of Congress – both Democrat and Republican – and government and religious leaders gathered on Washington, D.C. for the annual multifaith breakfast.

Every president has attended since it began in 1953.

Here are three key moments of the prayer breakfast you should know about:

The keynote speaker was Gary Haugen, CEO of International Justice Mission – an organization that works to stop human trafficking.

He urged the political leaders in attendance to unite in fighting modern slavery.

Even in this era of divided politics, he pointed out, there are causes everyone can support such as:

He said, “But few of us may know that there are actually more people in slavery today than in any other time in history.”

“Modern slavery is as vast and brutal as it has ever been,” he said, noting that there are an estimated 40 million people currently enslaved around the world, with more than 70 percent of them being female … and one in four of them being a child.

“The great canopy of history is firmly held in the scarred hands of a God who speaks galaxies into being,” he stated. “We know the One who is seated upon the throne will one day wipe away every tear, and death and pain and mourning will be no more.”

He urged all of us not to become disengaged, but act for justice.

“This is the great tragic and gracious story of our nation. God worked through great heroes to bring waves of freedom, prosperity, and justice like the world had ever known.”

“it’s amazing that this song was written from a once slave trader and is probably the most beloved song in all the world, Tomlin said. “John Newton said God saved him in a dramatic way, and he wanted to spend the rest of his life preaching the good news and the freedom of God.”

A video isn’t yet available of Chris Tomlin singing at the prayer breakfast at the time of this writing, but here’s a video of him singing his version of “Amazing Grace” during a worship service (8 ½ minutes).

You might want to watch the presidents entire talk below.

But what really stood out was when he said, “Since the founding of our nation, many of our greatest strides – from gaining our independence to abolition, from civil rights to extending the vote to women – have been led by people of faith and started in prayer. When we open our hearts to faith, we fill our hearts with love.

“Many of the people in this room lead and support the charities and faith-based institutions that bring hope to the lives of our citizens, comfort to those in despair and solace to those in grief, aid to those in need and a helping hand to struggling people all around the world.”

Further, just like he did in the State of the Union, the president spoke boldly for life.

“As part of our commitment to building a just and loving society, we must build a culture that cherishes the dignity and sanctity of innocent human life. All children born and unborn are made in the holy image of God.

“Every life is sacred, and every soul is a precious gift from heaven. As the Lord says in Jeremiah, ‘Before I formed you in the womb, I knew you. Before you were born, I set you apart.’”

President Trump closed his remarks with a call for unity and a call to prayer, saying, “We are blessed to live in a land of faith where all things are possible… On Tuesday, I asked Americans to choose greatness… Greatness for our country … and to renew our love and loyalty to one another as friends, as citizens, as neighbors, as patriots and as Americans.

“There could be no better way to begin this exciting national adventure than the way America has always begun our greatest adventures – by coming together in prayer. So today and every day, let us pray for the future of our country.

“Let us pray for the courage to pursue justice and the wisdom to forge peace. Let us pray for a future where every child has a warm, safe and loving home.

“Let us come together for the good of our people, for the strength of our families, for the safety of our citizens… And let us always give thanks for the miracle of life, the majesty of creation and the grace of Almighty God.”

You can watch President Trump’s introduction and remarks here (about 25 minutes).