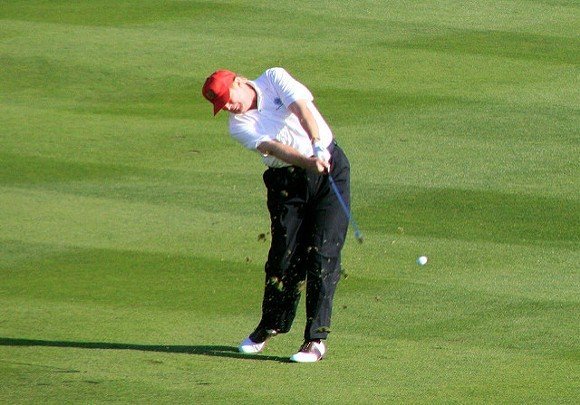 When Donald Trump was President of the United States, he was criticized, vilified, demonized and declared unfit for office whenever he went golfing – especially if he did so during a time declared by the news media to be a “crisis.”

How standards of acceptable presidential behavior have changed since Joe Biden became president.

Here is a sampling of news headlines about President Trump playing golf:

And this doesn’t even include CNN’s total obsession with Trump’s golfing schedule while he was president:

July 14, 2018 – “The Trumps are spending the weekend at the President’s Scottish golf resort as UK protests continue”

September 3, 2019 – “Why Donald Trump golfing during Hurricane Dorian is a problem”

May 25, 2020 – “Trump golfs at his Virginia club amid the coronavirus pandemic”

May 28, 2020 – “Trump golfs during pandemic despite many attacks on Obama for golfing during tragedies and disasters”

December 25, 2020 – “Trump feels no pressure to be President while Americans suffer at Christmas”

In contrast, the biased media paid little attention to a recent golfing outing by President Biden in spite of the following ongoing crises faced by his administration:

The media either ignored the golf outing altogether or made light of it, focusing on Biden’s golfing skills – or lack thereof – rather than on the crises he wasn’t attending to.

The double standard exhibited by the media in its reporting on the Trump presidency versus the Biden presidency is striking.

One Comment on “Media Bias on Steroids: Golfing During a Crisis is Either Criminal or a Fun Recreational Activity Depending on Who is President”