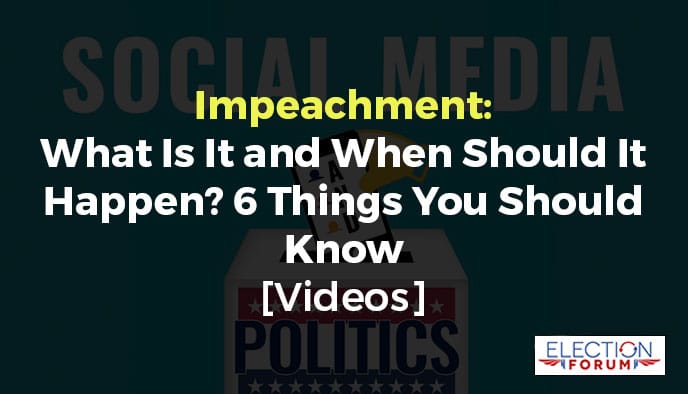 The political and media frenzy to impeach President Trump has reached a fever pitch.

The innuendoes … the distortions … the false and misleading accusations, information and statements … are dividing the country.

In a new poll, 40% of voters believe President Trump is the victim of a political “lynching” … but 54% of voters disagree.

So, what IS impeachment exactly … and when should it happen?

1. Impeachment and removal from office are two different things.

The causes for impeachment at the federal level are listed in Article II, Section 4 of the Constitution, which states:

“The President, Vice President and all civil Officers of the United States, shall be removed from Office on Impeachment for, and Conviction of, Treason, Bribery, or other high Crimes and Misdemeanors.”

Impeachment is carried out in the House of Representatives according to Article 1, Section 2…

It is similar to an indictment by a grand jury. It’s a formal charge of wrongdoing that is considered worthy of removal from office.

The impeachment trial – concluding with either acquittal or conviction – is carried out in the Senate as required by Article I, Section 3.

Each article of impeachment referred to the Senate from the House is considered separately – just like each “count” in a trial on criminal behavior.

A two-thirds majority vote “of the Members present” in the Senate is required for conviction on each article of impeachment referred by the House.

2. The process of impeachment in the House is determined by House rules.

There has been much controversy over the secrecy and the lack of due process in the current impeachment inquiry that has been taking place behind closed doors in the House Intelligence Committee.

Unfortunately for Republicans, the Democrats get to make the rules since they control the House … and all committees in the House.

This doesn’t give them the right to trample on the due process rights of minority members … but sometimes this happens.

This has not happened in the Trump impeachment inquiry.

Past presidential impeachment inquiries have been open and public, with:

In the President Trump impeachment inquiry, none of the above due process requirements have been met – at least not yet.

After the inquiry is complete and Articles of Impeachment are formally drawn up, the full House of Representatives votes separately on each Article. A simple majority vote is required for impeachment.

3. The case for impeachment: Treason is defined in the Constitution; high crimes and misdemeanors is not.

“Treason against the United States, shall consist only in levying War against them, or in adhering to their Enemies, giving them Aid and Comfort. No Person shall be convicted of Treason unless on the Testimony of two Witnesses to the same overt Act, or on Confession in open Court.”

For example, in Federalist 65, Alexander Hamilton noted that impeachment could be based on “the misconduct of public men, or in other words from the abuse or violation of some public trust.”

In the past, Congress has identified three general types of conduct that could constitute grounds for impeachment:

4. The Deep State has wanted President Trump removed from office since the day of his inauguration.

On January 20, 2017 – the day President Trump was inaugurated – the Washington Post published a story with the following headline:

The campaign to impeach President Trump has begun

The U.S. intelligence agencies tried to destroy Trump during the 2016 election campaign…

When that failed, they attempted a political coup to nullify the 2016 election and disenfranchise 63 million voters … and subvert the electoral college vote.

How did they attempt it?

5. Why Donald Trump is hated so much by so many career politicians and bureaucrats.

6. Should President Trump be impeached?

Most rational, reasonably thinking people from both sides of the political aisle say No…

Ken Starr – the special independent counsel who investigated the Bill Clinton-Monica Lewinsky scandal and brought articles of impeachment against President
Clinton in 1998 – says, “Impeachment is hell.”

He believes it’s a wrenching experience to put the American people through … and Congress should be very hesitant to resort to it.

Harvard law professor Alan Dershowitz – a lifelong Democrat and Hillary Clinton supporter in 2016 – never has and still does not support the impeachment of President Trump.

He has written a book, The Case Against Impeaching President Trump.

Watch this video of Dershowitz arguing that impeaching Trump would put Congress above the law (3 ¾ minutes).

Watch this short video clip of Ken Starr warning that Congress should be very careful and cautious in deciding to impeach the President of the United States (37 seconds).

Watch this video in which Tucker Carlson breaks down the real “impeachable offense” for which establishment politicians want to remove President Trump from office: he disagrees with the political establishment’s foreign policy goals with respect to Russia and Ukraine (5 ¾ minutes).

One Comment on “Impeachment: What Is It and When Should It Happen? 6 Things You Should Know [Videos]”