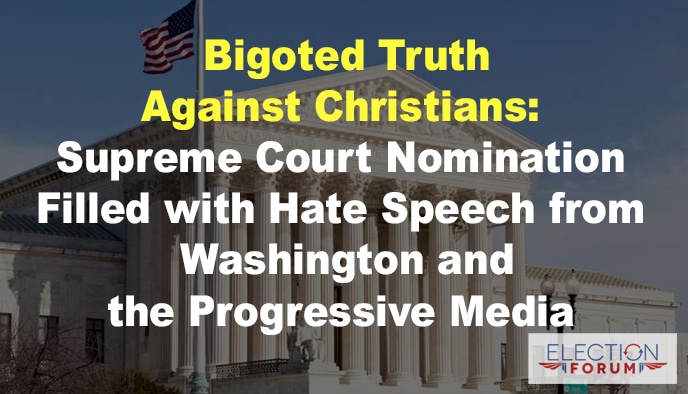 If you listen to the politicians or the progressive media, they are going ballistic – including attacking Christians for their faith…

It’s sad that in America – the beacon of religious liberty – the progressives hate … and are so intolerant of … those with Christian beliefs.

A good example of this is Senator Dianne Feinstein, who said, “Dogma and law are tow different things. And I think whatever a religion is, it has its own dogma. The law is totally different…”

Now that a historic Supreme Court nomination is about to take place, bigotry against Christians is again on the rise … this time in relationship to federal appeals court judge Amy Coney Barrett

Judge Barrett is one of the finalists on President Trump’s short list for replacing retiring Supreme Court Justice Anthony Kennedy.

Her academic and professional credentials are impeccable:

She’s a devout Catholic Christian … and has been linked to an ecumenical parachurch group called “People of Praise.”

People of Praise teaches that husbands are the heads of their households … and that they are tasked with being the spiritual leaders of their wives.

Progressives refer to People of Praise as a “secretive religious cult.”

The progressive media and Democratic politicians attacked Barrett relentlessly for her Christian faith during her Senate confirmation hearing last year for the 7th circuit court of appeals – and they’re doing it again now.

A former Obama White House staffer and evangelical author warns that the obvious religious bigotry expressed by Democrats could backfire badly in the next general election.

3 Comments on “Bigoted Truth Against Christians: Supreme Court Nomination Filled with Hate Speech from Washington and the Progressive Media”