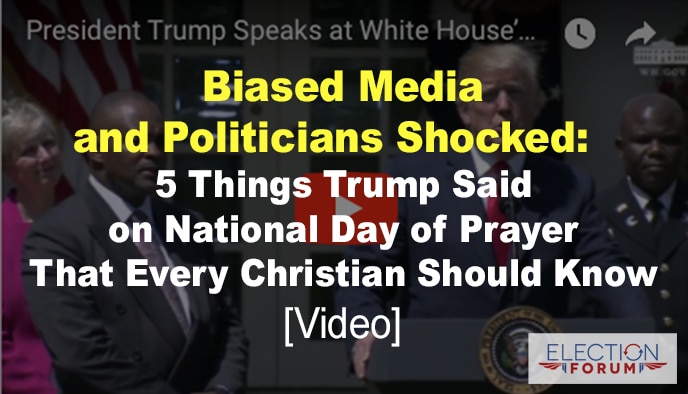 The National Day of Prayer was held nationwide.

Because the truth of Jesus Christ and support for religious liberty were clearly proclaimed by President Trump.

Here are 5 things that Trump said that every Christian should know about:

In the past, the government has discriminated against churches and charities for helping people because of their faith. For example, FEMA refused to give recovery aid to religious organizations in the wake of natural disasters like Hurricane Harvey.

President Trump, however, is bringing radical change. He signed an executive order that ensured that the government will protect faith-based organization and give them fair access to funding.

President Trump did not try to be politically correct and avoid talking about Jesus Christ. Instead, he boldly proclaimed the truth of Jesus by quoting this Scripture:

“For we are God’s handiwork, created in Christ Jesus to do good works, which God prepared in advance for us to do.” (Ephesians 2:10)

Trump told the story of Ji Seong-ho, a North Korean defector who was tortured by the government and eventually escaped. Seong-ho is a Christian who could have been killed for his faith in North Korea. But Trump told of his powerful faith, and how he prayed the Lord’s prayer over and over during his captivity—helping him to hold onto hope for freedom.

In an age when Christians have been censored, sued and persecuted for standing by their religious convictions – and exercising their freedom of speech – President Trump affirmed the importance of First Amendment rights.

“When Americans are able to live by their convictions, to speak openly of their faith and to teach their children what is right, our families thrive, our communities flourish and our nation can achieve anything.”

Trump took a stand for religious freedom, making a firm statement to radical progressives who want to rob Christians of their rights.

President Trump talked about how God is central to the Declaration of Independence, in the Pledge of Allegiance, our national monuments on our currency. When radical liberal politicians are trying to take God out of our schools, businesses and even homes, Trump is declaring that belief in God is core to our very nation.

The National Day of Prayer was a significant turning point for religious freedom in America. President Trump took a bold stand for liberty and faith in a time when Christians in particular are being attacked and persecuted – right here in America.

12 Comments on “Biased Media and Politicians Shocked: 5 Things Trump Said on National Day of Prayer That Every Christian Should Know [Video]”