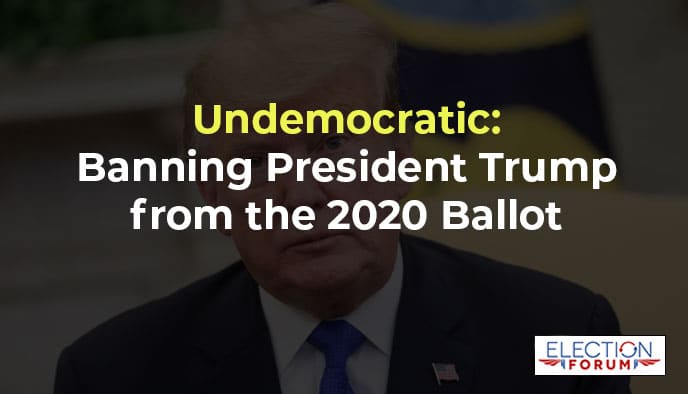 It’s ridiculous. But they are dead serious…

17 states are trying to take President Trump off their 2020 presidential ballot.

It’s because Trump’s enemies are demanding he release his income tax returns to the public.

There is no law that requires presidential candidates – or sitting presidents for that matter – to release their tax returns to the public.

Although it’s been common practice since the 1970s, candidate Donald Trump broke the tradition in 2016 by claiming he couldn’t release his returns because they were being audited by the IRS.

According to the U.S. Constitution, the requirements for presidential candidates are:

That’s it. Congress can’t add to the constitutional criteria through federal legislation.

The only way presidential candidates can be forced to release their tax returns is through a constitutional amendment to Article II … which would require ratification by three-fourths – currently 38 – of the state legislatures.

Bills to exclude President Trump from the 2020 ballot have passed the state senate in California, Hawaii, Illinois and Washington.

These Blue States are out of line. They complain about the Russians – and Donald Trump – attacking our democracy…

But these Democrat-controlled state legislatures are the real attackers and defilers of our democracy … our Constitution … and the will of the American people.

Voters knew in 2016 that Trump wasn’t going to release his tax returns … and enough voted for him anyway to elect his president.

Whether you like President Trump or not, this kind of political retaliation is wrong.

If you agree, watch for our upcoming petition to let your elected state representatives know what you think.

7 Comments on “Undemocratic: Banning President Trump from the 2020 Ballot”