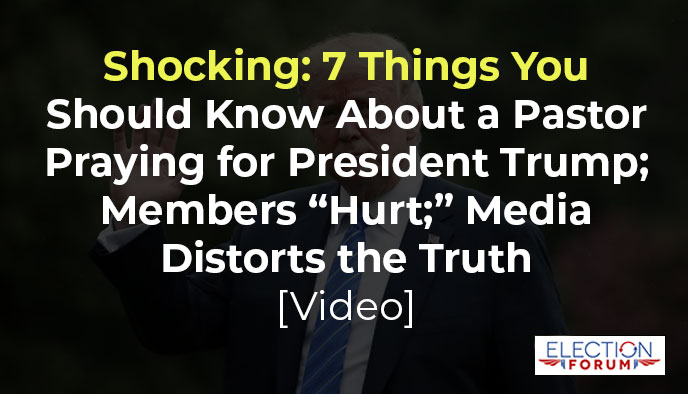 The pastor prayed a powerful prayer for the president … not knowing ahead of time that he would be visiting his church that day.

The church was shocked…

The media was shocked…

And sadly, some were angry and “hurt” by the pastor’s actions.

So why would some members or attendees of McLean Bible Church in Vienna, Virginia – a suburb of Washington, D.C. – be “hurt” by Pastor David Platt praying out loud for President Trump at the end of a June 2nd communion service?

This was the Sunday that Rev. Franklin Graham – along with over 250 other evangelical Christian leaders across the nation – had designated as a special day of prayer for President Trump.

The president is under enormous pressure – probably more pressure than anyone else would be able to endure and still function:

Whether you agree with his policies or not … whether you like him or not … he needs our prayers more than ever.

Here are the facts of what actually happened on June 2nd at McLean Bible Church:

But it isn’t surprising considering how much the mainstream progressive media hates President Trump – and wants to slam anyone who doesn’t share their hatred.

The warfare between God and Satan … between good and evil … between Biblical commandments and man’s sinful nature … is raging today perhaps more than ever before.

As Christians, we are commanded in 1 Timothy 2 to pray for our governing authorities … all the way up to, and including, the President of the United States.

“First of all, then, I urge that entreaties and prayers, petitions and thanksgivings, be made on behalf of all men, for kings and all who are in authority, so that we may lead a tranquil and quiet life in all godliness and dignity. This is good and acceptable in the sight of God our Savior, who desires all men to be saved and to come to the knowledge of the truth. For there is one God, and one mediator also between God and men, the man Christ Jesus, who gave Himself as a ransom for all, the testimony given at the proper time. (! Timothy 2:1-6, NASB)

Here is a link to Pastor Platt’s letter to his congregation – and to a video of the entire introduction and prayer (5 minutes). Please take the time to read the entire letter and watch the entire video so you will know the whole truth and not just the portion of the truth the media wants to present to you.

Also watch this news clip of Pastor Robert Jeffress – First Baptist Church of Dallas – commenting on Franklin Graham’s call to pray for President Trump … and commenting on those who criticized the call as a political stunt (3 ½ minutes).

11 Comments on “Shocking: 7 Things You Should Know About a Pastor Praying for President Trump; Members “Hurt;” Media Distorts the Truth [Video]”