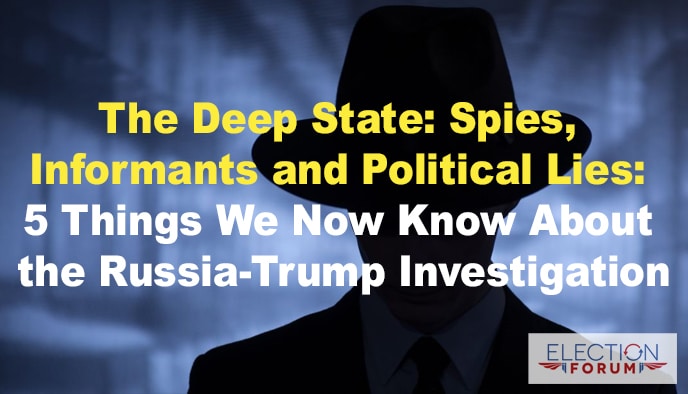 Let’s not get bogged down with semantics…

Whether you call him a spy … an informant … a human source … is irrelevant.

It’s not what you call him that matter …

What’s important is what he does … and why he’s doing it.

Here are 7 things we now know about the origin and the real reasons for the Trump-Russia collusion investigation:

They planted at least one spy in the Trump campaign … as part of an operation they called “Crossfire Hurricane.”

And they didn’t do it for the reasons they say they did it.

Stefan Halper is a national security and foreign policy scholar … and Senior Fellow at University of Cambridge.

Michael Flynn attended the seminar in 2014 … while he was director of the Defense Intelligence Agency.

They presented the infamous Steele dossier as verified intelligence product…

They deliberately hid the fact that the DNC and the Hillary Clinton campaign paid for the opposition research.

It encourages alternatives to human spies in any investigation … especially the investigation of an opposition candidate in a presidential election.

Instead of informing Trump about their concerns over the Russian connections of Carter Page and Paul Manafort, the FBI and DOJ treated the Trump campaign as a criminal enterprise.

They should have focused instead on Russian agents who were meddling in the election process by hacking computers and by placing ads on social media.

CIA Director John Brennan – an avowed Trump hater – lied to Congress when he said the Steele dossier had no influence on intelligence assessments.

Based on the accusations of collusion with Russia in the dossier, Brennan conducted secret meetings at CIA headquarters with a cast of other Trump haters from across the Obama administration … which led to the creation of the “Crossfire Hurricane” spy program.

Their purpose was to prevent Donald Trump from being elected president … and to bring down his presidency in the unlikely event he were to win the election.