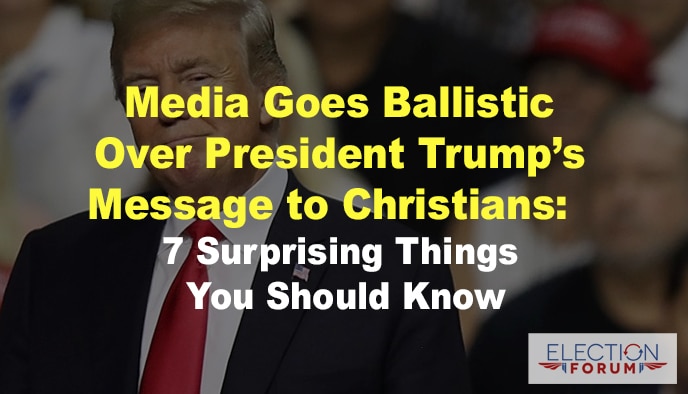 The media took exception to this event and attacked the president for catering to Christians … and for using a single word during his talk with them.

The left went ballistic over this word…

Here are 7 things you should know about this meeting:

Some of the well-known Christian leaders were:

“We’re here this evening to celebrate America’s heritage of faith, family and freedom. As you know, in recent years, the government tried to undermine religious freedom. But the attacks on communities of faith are over… Unlike some before us, we are protecting your religious liberty,” he said.

“In the last 18 months along, we have stopped the Johnson Amendment from interfering with your First Amendment rights… We’ve taken action to defend the religious conscience of doctors, nurses, teachers, students, preachers, faith groups, and religious employers…

“We reinstated the Mexico City Policy [President Reagan] first put into place… We proposed regulations to prevent Title X taxpayer funding from subsidizing abortion. I was the first president to stand in the Rose Garden to address the March for Life…

“My administration has strongly spoken out against religious persecution around the world, including the persecution of Christians… We’ve recognized the capital of Israel and opened the U.S. Embassy in Jerusalem…

“Every day we’re standing for religious believers, because we know that faith and family, not government and bureaucracy, are the center of American life. And we know that freedom is a gift from our Creator…

“Together, we will uplift our nation in prayer, defend the sanctity of life, and forever proudly remain one nation under God.”

This is where he got in trouble with the media.

In casual conversation, Trump warned of the consequences of losing control of Congress in the November midterm elections.

“When you look at Antifa and you look at some of these groups, these are violent people.”

Notice that Trump didn’t use the word “violence” … that word doesn’t go with the word “quickly.”

The media likes to twist President Trump’s words and turn them into different words … and then isolate the changed words from their context.

They made it sound as if Trump was predicting civil war if the Democrats took control of Congress in the midterm elections … and that the “violence” would be committed by his own supporters.

He asked anyone who wanted to, to come up and say a few words to the gathering.

And most of them, being preachers, preached. They shared their hearts and their minds…

And they prayed for you and me.

But it certainly was an open door to the Christian community … which I thank the president for.

At least two progressive news outlets accused the president of “falsely” telling the Christian leaders that he had “revoked a law prohibiting charities and churches from giving formal political endorsements” – a reference to the Johnson Amendment.

But to claim that President Trump spoke untruthfully is splitting hairs…

The media attacked the event … the prayers … and the fact that President Trump has Christian support.

In all, this was an unusual and powerful way for the president to reach out to Christians, tell them what he’s done, and ask for their prayers.

27 Comments on “Media Goes Ballistic Over President Trump’s Message to Christians: 7 Surprising Things You Should Know”