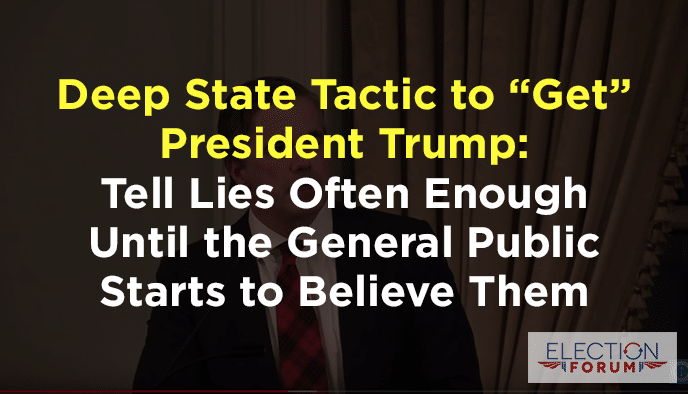 For the past two weeks we’ve been describing 12 shocking and unprecedented actions the Deep State has been taking to force President Trump out of office. These actions really began even before he won the 2016 election … and before he was inaugurated on January 20th, 2017. Click here and here to review those articles.

President Trump has been an unconventional president … there’s no doubt about that.

His use of social media to bypass the traditional mainstream press and communicate directly with millions of American voters drives the progressive media crazy.

His constant criticism of the press as “fake news” and “the enemy of the people” makes the progressive media hate him all the more.

His “shoot from the hip” style of foreign diplomacy is a concern for many … as are his suspected past moral lapses in judgment.

But the one thing the Deep State hates about Donald Trump more than anything else is that he’s a direct threat to their grip over American politics and the federal government bureaucracy that controls business, the economy, the judiciary, the executive-branch intelligence and law enforcement agencies … and more.

When Donald Trump promised to “drain the swamp” during his presidential campaign, the Deep State determined that he would never succeed.

This is why the Hillary Clinton campaign and the Democratic National Committee hired a law firm to hire Fusion GPS – and opposition research company – to hire Christopher Steele – a former British spy – to compile a phony “dossier” of memos accusing Donald Trump of illicit sexual behavior and of colluding with the Russian government to steal the 2016 election from the consensus heir to the presidency, Hillary Clinton.

This is also why Andrew McCabe – former FBI Deputy Director under James Comey – opened two counterintelligence investigations against President Trump in the days after he fired Director Comey.

This is also why there’s been a silent coup attempt to remove Trump from office since the day he was inaugurated – by both current and former top-tier officials at the FBI, the CIA and the NSA.

It’s the swamp fighting back.

It’s the Deep State mentality that resists any type of change … and the unconventional leadership style of President Trump.

The entire “Russia collusion” investigation has been primarily a cover for the coup attempt that’s been developing in secret ever since Trump took office. There has never been any evidence of collusion between Donald Trump and Russia to affect the outcome of the 2016 election … despite the claims of California Democrat Representative Adam Schiff.

On the other hand, the collusion between Hillary Clinton, Barak Obama, the Democratic National Committee (DNC), and the bureaucrats within the Department of Justice and the FBI is unprecedented.

This is the collusion that is a threat to our Republic…

The progressive media has covered up this collusion and has instead focused on the endless and baseless Russia-Trump campaign collusion investigation.

Because the progressive media has always been the spokesperson and the cheerleader for the Deep State resistance against President Trump and his “Make-America-Great-Again agenda.

The media is now gleefully covering the testimony of Michael Cohen – one of President Trump’s former personal lawyers – who has now “flipped” and is heaping criminal allegations on the president.

Cohen – a convicted felon for previously lying to federal prosecutors while under oath – is repeating the same lies the media and the “never-Trump” politicians have been repeating for the past 2 ½ years.

The goal of those who want to neutralize President Trump and eventually remove him from office are hoping that if the American hear these lies often enough, they will start to believe them.

The day Cohen’s testimony was broadcast live on TV was deliberately timed to be the same day of President Trump’s summit with North Korea’s Supreme Leader Kim Jong-un in Hanoi, Vietnam.

This wasn’t a coincidence.

Whenever President Trump is accomplishing something significant for the security and prosperity of the American people, the Deep State Trump haters schedule some other “newsworthy” event to dominate the headlines and the media coverage.

To learn more about the motives, the strategies, the tactics and the depth and breadth of the Deep State, do these two things:

1. Watch this 15 ½-minute video of Joe diGenova and Tom Fitton explaining some of the strategies, tactics and scandals perpetrated by the Deep State.

2. Get my book, The Deep State: 15 Surprising Dangers You Should Know. Click here to order.

There are links on this page to order direct and save 20%, or to order from Amazon in either hardback or Kindle versions.