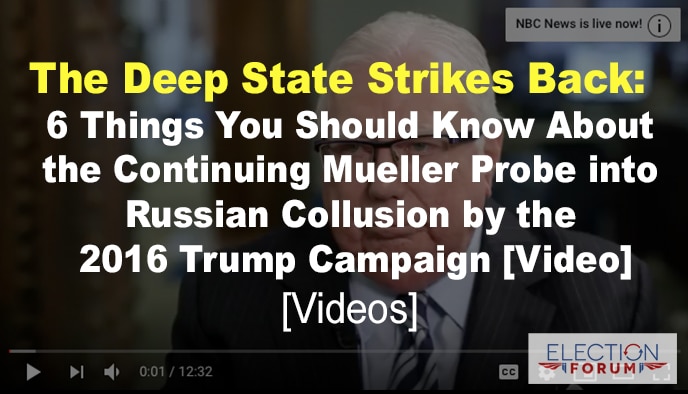 I recently spent over 2 hours in the car – and more time at a dinner party – with Victor David Hansen.

He is insightful, a popular author, and is often seen on TV.

I think you’ll enjoy his insights into the Mueller Probe.

Here are 6 things you need to know about the deep state scandal in the Mueller probe:

1. With all the rumors about the Mueller Probe on Russian collusion ending soon, we just don’t know.

And if Trump is elected for a 2nd term in 2020, he could be under investigation for his entire 2nd term as well.

2. There was obvious collusion between the Hillary Clinton campaign, Fusion GPS, Christopher Steele and Russian operatives.

All of these issues are being ignored by Robert Mueller and his team of investigators and prosecutors.

But there’s plenty of that. Here’s just one example:

In the article, Glenn Simpson talks about Paul Manafort’s connection to the then Prime Minister of Ukraine, Victor Yanukovich, who favored closer ties to Russian President Vladimir Putin.

The same information about Paul Manafort was reproduced in the Steele dossier … and led to Paul Manafort being indicted for money laundering and other crimes.

3. Now the Mueller Probe is going after Jerome Corsi, author of a book on the Deep State similar to my book.

My book, The Deep State: 15 Surprising Dangers You Should Know digs into the issues Corsi’s book does not cover. Corsi has made an impact … so now the deep state is after him…

He is standing firm, refusing to sign a “plea agreement.”

Let me explain about plea agreements…

You are intimidated and told you’ll spend time in jail…

You’re intimidated by the prosecutor that if you do not sign something – even if it’s not true – it’s just not worth it to stand for truth.

Very few people can resist. After all, it’s just a simple lie … a simple throwing under the bus … a falsehood…

And you don’t spend time in jail, you rationalize, “Why not?”

4. The U.S. justice system is corrupt.

The Department of Justice, the FBI and the NSA had no evidence of Russian collusion by the Trump campaign – or of any criminal activity of any kind – when they began spying on Carter Page and other advisors of candidate Donald Trump…

Yet they forged ahead anyway.

The wire tapping … the spying … and the now-open-to-anything Mueller investigation never should have been allowed to happen.

The clear goal of the Mueller Probe is to destroy the Trump administration … and remove Donald Trump from office – either by resignation or impeachment.

5. The Deep State is attacking President Trump in every way possible.

They are trying to criminalize Trump’s past business interests in Russia … by using the case against Paul Manafort as sufficient reason to accuse the president of the same crimes … or to at least make himguilty by association.

But there are no laws prohibiting companies or individuals from doing business in Russia.

President Trump has turned his business interests over to his family – which is perfectly legal and permissible. He has done nothing illegal in the past … and he’s doing nothing illegal now.

6. Why you need to read my book, The Deep State: 15 Surprising Dangers You Should Know.

There are several books available now on the Deep State. But none of them cover the breadth of the Deep State to the extent The Deep State: 15 Surprising Dangers You Should Know does.

The Deep State has permeated nearly every organization and institution of society:

You can order my book by clicking here.

This page includes links to Amazon, where you can order the book either in hard back or in Kindle format.

In a recent speech during the David Horowitz Freedom Center Restoration Weekend in Palm Beach, Florida, he talked about how the scandalous investigation of Trump-Russia collusion began.

The speech is 37 minutes long. Bookmark it and watch it whenever you have time. You’ll be amazed at the past connections between Robert Mueller, Christopher Steele, the Clinton Foundation and Fusion GPS.

Watch this 12 1/2-minute video of Jerome Corsi explaining in his own words why he won’t accept the Mueller Probe’s plea agreement.

At about the 9:15 point in the interview, Mr. Corsi tells the interviewer that she is “locked into official government explanations of events they don’t want to examine.”

Here are this week’s articles