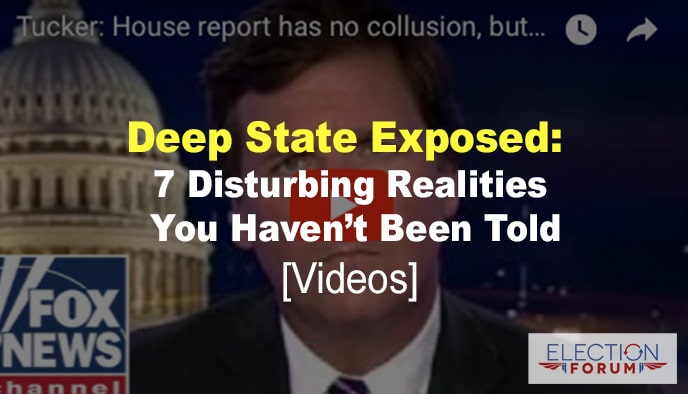 Ever since he became President Trump, ideologically-driven Deep State bureaucrats in government have been doing everything within their power to undermine him … to convince Americans that he is unfit for the presidency … and ultimately to remove him from office.

Here are 7 disturbing realities you need to know about the Deep State and its involvement in the Russia collusion narrative that has been consuming the news industry and the American public for the past 16 months:

The investigation of Russian collusion – and the corresponding media obsession with speculative reporting about it – has been going on for nearly 16 months.

The media had reported that 3 anonymous sources disputed Sessions’ testimony before both the House Judiciary Committee and the House Intelligence Committee that he had rejected the Papadopoulos proposal.

The “anonymous sources” claiming that Sessions agreed to a meeting between the Trump campaign and Russian government officials was supposed to be the “smoking gun” that proved collusion with Russia.

The media hasn’t reported on this so-called evidence of collusion for many months.

Because the 253-page House Intelligence Committee report on Russian Active Measures identifies 4 witnesses who testified that Sessions did in fact reject Papadopoulos’ offer of a Russia meeting.

One of the witnesses even stated in his testimony that when Papadopoulos introduced the idea of making contact with the Russian government on behalf of the Trump campaign, Senator Sessions interrupted and talked about the Logan Act – the law that criminalizes unauthorized negotiations between private citizens and foreign governments.

Reality #3. Corrupt government officials in the intelligence agencies and Department of Justice (DOJ) worked to undermine Trump’s ability to be president.

Only after Trump won the election did the CIA produce its Intelligence Community Assessment (ICA) that Russia intervened in the 2016 U.S. presidential election to help candidate Trump win the presidency.

The purpose of the ICA was to delegitimize the votes of millions of Americans – and Trump’s election.

Prior to election day, the focus of both the media and the intelligence community reports was that Russia’s sole objective was to undermine confidence in the U.S. electoral system…

One month after the election, leaks of information from the classified ICA begin appearing in mainstream media publications.

Reality #4. The Christopher Steele dossier – a compilation of 16 memos obtained by second- and third-hand sources – formed a “substantial and essential” part of the Foreign Intelligence Surveillance Court (FISC) application to conduct electronic surveillance on Carter Page – Trump’s foreign policy advisor during the 2016 campaign.

Despite denials by former FBI Director James Comey – and by the Democrats on the House Intelligence Committee – former Deputy FBI Director Andrew McCabe testified that the FISA application never would have been granted without the Steele dossier.

An earlier FISA application to conduct general surveillance on a Trump Tower computer and on the Trump campaign had been rejected.

The FBI and the DOJ Deep State bureaucrats presented the dossier contents as an active intelligence product … when obviously it wasn’t.

It was politically-motivated opposition research on Donald Trump that had been paid for by the Democratic National Committee (DNC) and the Hillary Clinton campaign.

The FBI and DOJ deliberately withheld this information from the FISC judge.

Reality #5. The CIA/NSA/FBI/DOJ bureaucrats lied to the American people.

In sworn testimony before Congressional investigators, James Clapper – former Director of National Intelligence – said he never discussed the Steele dossier with anyone in the press until after he left the government.

But he subsequently acknowledged discussing the dossier with a CNN journalist – who published a report on it in early January 2017 – while Clapper was still Director of National Intelligence.

Clapper was famously untruthful to Congress in 2013 when he denied the NSA gathers any kind of data on American citizens.

Congressional leaders called for him to be prosecuted for that false statement.

Reality #6. The infamous and fraudulent Steele dossier was a political weapon used by Deep State bureaucrats.

The Steele dossier was used as a “setup” – a tool – to hamstring a president and an administration that “permanent Washington” – the Deep State – opposed from Day One.

Former FBI Director James Comey claimed in a recent interview that James Clapper encouraged him to brief President-elect Trump on the dossier during the transition period after the election.

It was all designed to discredit Trump and delegitimize his election victory.

And the press rarely apologizes when they are proven wrong … which they are now as the Deep State conspiracy against the Trump administration is becoming more and more obvious.

There would have been no investigation of Russian meddling in the 2016 election – or of Trump campaign collusion with the Russian government – if Hillary Clinton had won.

The unmasking of American citizens – all of them members of the Trump campaign, or Trump supporters – was another part of the concentrated effort to discredit Trump’s election victory.

Also watch this interview with a George Washington University Law Professor about allegations that James Clapper lied about releasing the Steele dossier to CNN before he left his government position as Director of National Intelligence (4 minutes):

One Comment on “Deep State Exposed: 7 Disturbing Realities You Haven’t Been Told [Videos]”