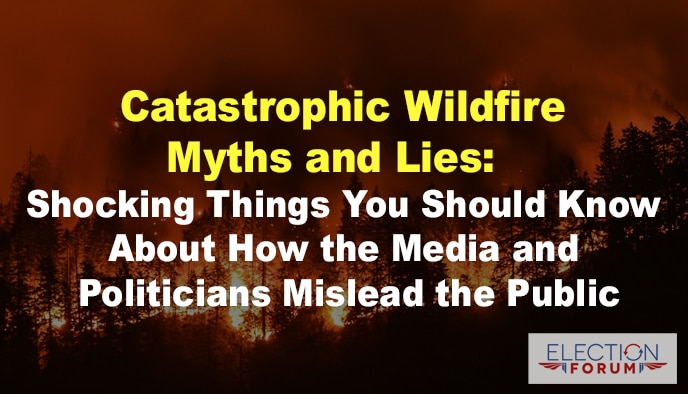 Across the nation, 2018 has been one of the worst fire seasons in memory…

But the Deep State bureaucrats, progressive politicians and the biased media are misleading the public about what’s causing so many wildfires to become so large so quickly.

In fact, in California, Governor Jerry Brown warns residents they’d better get used to massive wildfires every year as the “new normal” – caused by climate change.

But that’s just not true. It’s a big lie.

Here are 6 shocking things you should know about massive wildfires:

Forests that are under state and national ownership are catastrophically overgrown … often having 4 times the number of trees per acre the land can support.

For example, in the Stanislaus National Forest – the location of a massive wildfire this year– the tree density is about 300 trees per acre according to the fire officials battling that blaze.

This is the major reason for the rapid spread of wildfires … not “climate change.”

Also, nearly 130 million dead trees in California’s forests are like matchsticks and kindling when a wildfire is ignited…

The property where I have a home in the San Bernardino mountains – and my neighbor’s property – isn’t overgrown because it’s our private property. But behind my back yard – and next to my side yard – is a thick, dangerous tinder box of overgrown trees…

Because there is no private ownership of the land or the trees in the San Bernardino National Forest.

The current leaders of the government agencies responsible for forest management are ideologically driven to:

For one thing, hot, dry weather can’t produce the spark or flame that’s necessary to start a fire.

Second, if wildfires were being caused by global “climate change” we should expect the burned acreage worldwide to be increasing each year.

Regarding the increasing numbers of large wildfires, Interior Secretary Ryan Zinke had this to say: “I’ve heard the climate change argument back and forth. This has nothing to do with climate change. This has to do with active forest management.”

Third, it’s also worth noting that if climate change were to blame for wildfires, private lands would be impacted to the same extent as public lands.

They could reopen public meadowlands to grazing by cattle, horses and other animals.

They will never admit to any wrongdoing … to any neglect of forest management … or to any culpability with respect to the wildfires.

Their agenda and their takeover strategies are all documented in my new book, The Deep State: 15 Surprising Dangers You Should Know.

You can get a copy directly from me – or from Amazon (either hardcover or Kindle version) – by clicking here: https://deepstatebook.com/

2 Comments on “Catastrophic Wildfire Myths and Lies: 6 Shocking Things You Should Know About How the Media and Politicians Mislead the Public”