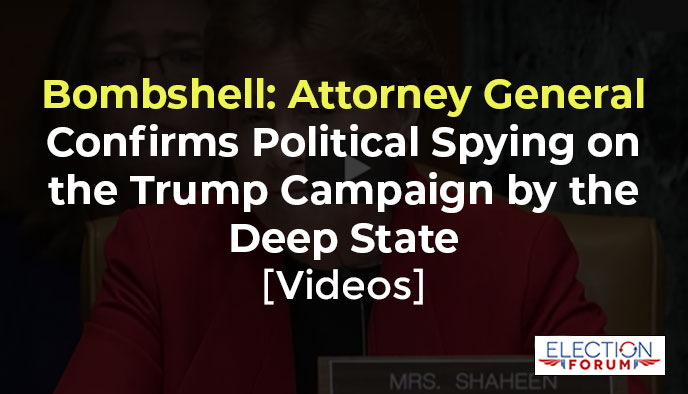 The anger and disconnect from reality just escalated as the established politicians were proven wrong. The Obama Administration and his intelligence agencies spied on the political opposition.

“I think spying on a political campaign is a big deal.”

“I think spying did occur.”

“I feel I have an obligation to make sure that government power is not abused … I think that’s one of the principle roles of the Attorney General.”

These are direct quotes from Attorney General William Barr’s testimony before the Senate Judiciary Committee this week.

The spying was historic.

And it’s dead wrong. The government should not be able to spy on a political campaign.

The new Attorney General has promised to investigate who started the Trump-Russia collusion hoax and why.

And those who have believed the Trump-Russia collusion story – and were hoping the Mueller report would confirm – are shocked and dismayed.

The corrupt Deep State bureaucrats abused their power. Let’s hope they will finally be held accountable.

All about the spying is in my book The Deep State: 15 Dangers You Should Know. You can get it on Amazon here. Or go to DeepStateBook.com for a special discount and autographed copy.

Watch Attorney General William Barr responding to questions from Sen. Jeanne Shaheen (D-NH) … and watch her reaction when he confirms that spying on the 2016 Trump campaign did in fact occur (5 minutes).

Watch Attorney General Barr explaining why releasing unredacted grand jury testimony to Congress would be a very bad thing to do (5 ½ minutes).