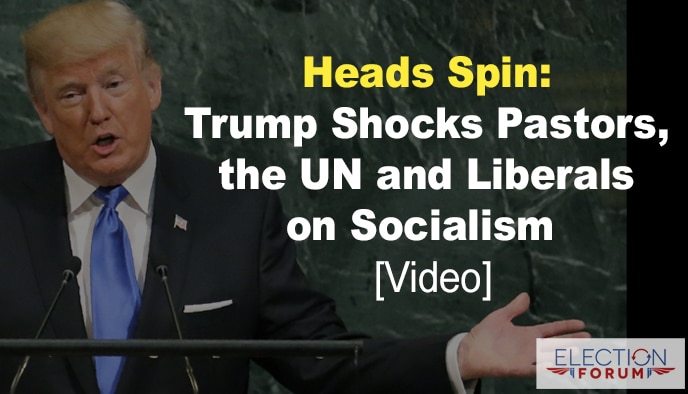 … Have been misled by the media, lack of economic understanding, and teachings that socialism is good … usually with the provision if only socialism was done right.

As President Trump said in his UN speech, “The corrupt regime imposes a failed ideology that produces poverty and misery wherever it is tried.

“He has defied his own people, stealing power from their elected representatives to preserve his disastrous rule.”

As the Venezuelan people starve and Democratic institutions are being destroyed, Trump hinted at future action:

Under socialism, the once-thriving nation of Venezuela is now on the brink of total collapse.

Under 18 years of socialism, Venezuela’s vast oil riches has not been able to pull the country out of poverty.

Maduro has, in the words of Trump, inflicted terrible pain and suffering on the good people of that country.

And yet, in America, we have moved more towards socialism under Barack Obama, Hillary Clinton, Bernie Sanders and other politicians.

Socialism, by its very nature, creates poverty, stagnation and oppression.

Socialism has a history of failure: Nazism (National Socialism) in Germany; Fascism in Italy; Communism in Russia.

And now in Venezuela.

Socialism is evil. The President calls out the evil.

Watch President Trump’s powerful comments on the failures of socialism in this short video.