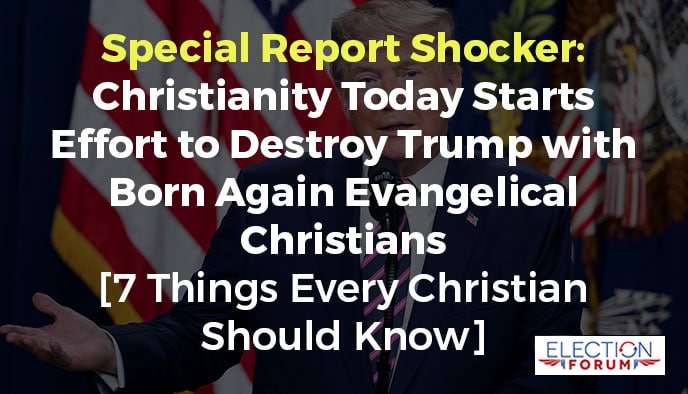 The #1 way to defeat President Trump in 2020 is to weaken, neutralize or erode Trump’s evangelical/born again support.

Because the evangelical vote is more than 25% of the total vote … and 81% of that voting bloc voted for Trump in 2016.

So the attack on the Trump Christian vote is intense, strategic, and purposeful.

The battle cry was started by an editorial in Christianity Today magazine.

1. What Happened: Christianity Today’s retiring editorial chief called for Trump to be impeached or voted out of office.

Christianity Today (CT) is one of America’s leading Christian magazines. It is read by most pastors and church leaders.

It sides with the secular worldview of proabortion, anti-Israel, and pro-restricting of Christian rights.

Franklin Graham – son of CT founder Billy Graham – said the impeachment of President Trump was “politically motivated, 100% partisan,” and he blasted CT, writing “It’s obvious that Christianity Today has moved to the left and is representing the elitist liberal wing of evangelicalism.”

Five Paragraphs into the anti-Trump editorial, author Mark Galli repeated a bad lie. He wrote: “But the facts in this instance [the Ukrainian phone call] are unambiguous.”

No, they are not. That’s why legal scholars, members of Congress and the American people are divided about the phone call.

2. The Reaction: Over 200 born again/evangelical leaders signed a letter totally disagreeing with the editorial.

They were Christian leaders and pastors of a variety of theological positions. Some of them included:

3. What they said: They said the editorial was dead wrong and terribly biased.

Part of what they said:

“We are, in fact, not ‘far right’ evangelicals as characterized by the author,” the letter said.

“Rather, we are Bible-believing Christians and patriotic Americans who are simply grateful that our President has sought our advice as his administration has advanced policies that protect the unborn, promote religious freedom, reform our criminal justice system, contribute to strong working families through paid family leave, protect the freedom of conscience, prioritize parental rights, and ensure that our foreign policy aligns with our values while making our world safer, including through our support of the State of Israel.”

“We are not theocrats, and we recognize that our imperfect political system is a reflection of the fallen world within which we live, reliant upon the grace of the Lord Jesus Christ, which is freely given to sinner and saint, alike.”

4. Reaction to the reaction: 15 Socialist/Liberal Pastors and leaders came to Christianity Todays defense.

They agreed with the anti-Trump position. All have a ministry of pro-Socialism/big government politics. They included:

Part of what they said:

“The United States evangelical and Christian community is at a moral crossroads,” the statement of support reads. “Our country has never been more politically divided with white evangelical Christians at the heart of much of the political discord. Regardless of whether or not one agrees with Galli’s conclusion or his argument, we write to affirm his courage and the bold decision to have Christianity Today officially take stand regarding the Trump Presidency.”

In 2018, Hillary Clinton didn’t pay any attention to evangelicals. She didn’t have a faith outreach. She even refused to be interviewed by Christianity Today.

That’s contrary to Obama, who had a large staff working only on the born again/evangelical vote … and had mail/email/digital targeting only Christians.

They all are quoting scriptures, Pete better than the rest as he is trained in theology. (See our article about Pete Buttigieg here.)

6. The Socialist/Liberal Evangelicals know they must act now.

Jim Wallis – who supports socialism, abortion, and same-sex marriage and is an Evangelical – is one of the long-time leaders promoting a liberal, pro-socialist worldview.

He is an author and publisher of Sojourners Magazine, the “Voice” for “Social Justice.”

He said it well:

“Seventy thousand people made the difference in three states’ electoral votes – Pennsylvania, Wisconsin and Michigan. Seventy thousand people wouldn’t even fill the University of Michigan football stadium! Add the fact that many African voters [in those states] didn’t turn out. The Sojourners is doing two big things: voter turnout and voter protection [in battleground states]. If the church can assist with voter turnout and protection, that could make a critical difference in this election.”

7. Passion and Dedication will determine the outcome of the next election.

Who has most passion and dedication to win the 2020 election?

“I don’t think democracy will survive another [Trump] term, another four years. This is also a test of faith because if, indeed, Donald trump leads us into America’s brand of fascism, we will lose a whole generation [of the faithful] forever, and I care about that deeply.”

Franklin said the impeachment was a sham – a “politically motivated, 100% partisan sham.”

According to a new poll from Political/Morning, support for Trump is going down among evangelicals.

The poll shows that 43% of evangelical voters would remove President Trump from office.

I don’t trust this poll.

But I do know the evangelical/born again audience is the #1 target of the Democrats for 2020.

That’s why it’s so critical we complete our voter guide for 2020 that shows where the candidates – for president, for local judges and for other elected positions – stand on issues important to Christians.

Thanks in advance for your help!

What do you think about the Christianity Today editorial calling for President Trump’s impeachment? Email me at craig@electionforum.org.