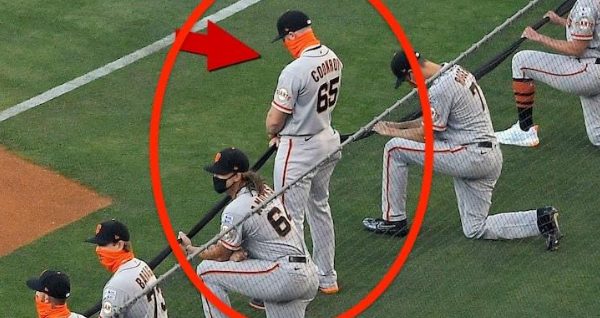 The rest of the players and staff from both teams kneeled in protest of the police and racial discrimination.

Why did he not kneel? Because he said as a Christian, he was uncomfortable with kneeling before anything or anyone other than God.

Sam was the only player on either team to remain standing.

NBC attacked the pitcher both as a “false Christian” and as “anti-humanity.”

“I meant no ill will by it,” Coonrod said. “I don’t think I’m better than anyone. I’m a Christian. I just believe I can’t kneel before anything besides God, Jesus Christ.”

“I chose not to kneel. I feel that if I did kneel, I would be being a hypocrite. I didn’t want to be a hypocrite. Like I said, I didn’t mean any ill will toward anyone.”

NBC said “When did real Christianity opt out of humanity? Give a pass to injustice and inequality? Decide that it’s disrespectful to offer support, if not shelter, to those in need? Does Coonrod not realize that pastors of all faiths are joining crowds around the world fighting for these very ideals?”

“Like so many others swimming against the tide of progress, if Coonrod had taken a moment to inform himself, he would see motive behind this movement need not be affiliated with BLM but, rather, to bring greater awareness to the racial injustices that is its focus.”

“See, what Coonrod did not say but surely crept into the minds of listeners and readers is that he believes the various evolutions of America’s two greatest sins —

the other being stealing land from the natives — are acceptable, that equality is something for others to deal with.”

“That Christianity has, somehow, disqualified him from the cause. There are only two rational explanations for what Coonrod said. One, he didn’t hear himself speak. Or, two, he heard every word he said and knows he did not say what he really meant.”

Sadly, even playing the national anthem has become political.

And, having an opposing opinion brings harsh immediate reaction.

What do you think? Email me at Craig@electionforum.org.

11 Comments on “NBC Attacks Christian Pitcher: Says “False Christian” Because He Stood Instead of Kneeling During National Anthem”