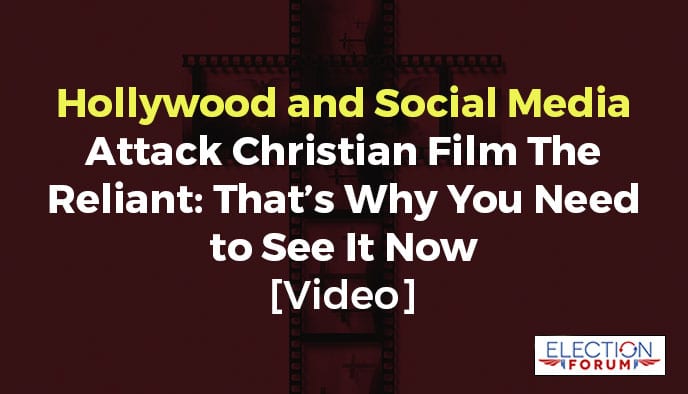 “Ex-Hercules Stars in Bonkers Trailer,” says the title bar in all capital letters underneath video of a trailer clip.

Rarely has a faith-based film received so much mocking and criticism.

Because the movie addresses tough questions about Second Amendment rights and whether or not God is really good and sovereign.

“When crisis strikes and their world crumbles, is God reliable to meet their needs or must their faith remain blind to facts?

“After an innocent trip to the store ends in rioting and chaos, father of five, Rick (Kevin Sorbo) rushes home desperate to gather his family and find safety. His plans are dashed when the very same armed men suddenly appear, led by the ruthless Jack (Brian Bosworth). Caught in the deadly crossfire, the children are forced to seek shelter in the surrounding woods.

“Alone and vulnerable, the children’s faith and family bonds are pushed to the limit, especially those of the eldest daughter, Sophie (Mollee Gray), who questions the morality of gun ownership but soon learns that in God all things are good, including her family’s Second Amendment right to defend themselves. It is now up to the children to reclaim their home, find their parents and put an end to Jack’s rampage.

“At the heart of The Reliant is a love story. It’s an anthem of hope in the hardest of times, of forgiveness, and of redemption.”

The description of the video begins with, “Kevin Sorbo’s new movie is coming soon, and boy, does it look bad.”

When Hollywood and the progressive news and social media attack a faith-based film in full force, you can be sure the movie is going to have real impact…

The Motion Picture Association of America gave The Reliant an R rating even though it has no foul language, no sex scenes, and less violence than Disney movies given a PG-13 rating.

Dr. J. P. Johnston – the screenwriter and producer of the film – had to appeal to the MPAA to get the R rating removed.

When asked what prompted him to create the film, Dr. Johnston said, “There’s a huge debate going on in this country about gun rights. Typically, when there’s a mass shooting, the Left wants to disarm everyone while the Christian right wants to offer prayers for the victims and defend the constitutional right to keep-and-bear-arms. This movie addresses what the Second Amendment is really about – protecting yourself and your family from criminals and from the tyranny.”

The Reliant will be in select theaters for one night only on October 24th.

It will be available on DVD in December.

To find a theater near you where you can see the movie, click here.

Watch the trailer for the movie below.

One Comment on “Hollywood and Social Media Attack Christian Film The Reliant: That’s Why You Need to See It Now [Video]”