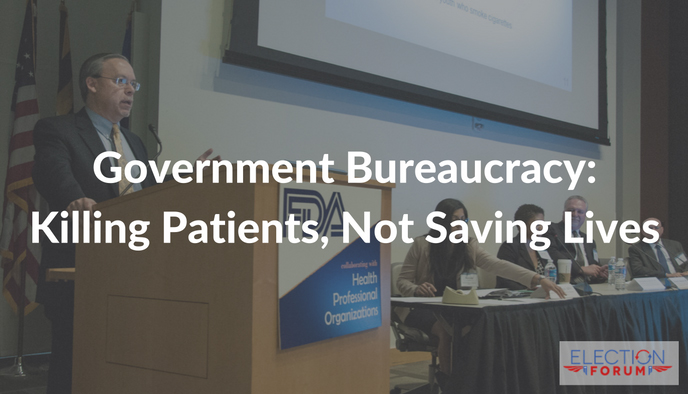 Parents want the best for their kids, especially when they’re sick.

Sometimes these kids have rare yet very debilitating, even deadly diseases.

New cures, and experimental drugs exist which can help. Even if the parents or the drug companies can’t know for sure if a new drug will work or have certain side-effects,

Yet in the United States, they face a heartless federal bureaucracy that slows down drug research and prevents otherwise helpful, life-enhancing drugs from reaching the marketplace.

Many desperate people get worse and worse—even die—when they could be helped.

Some go to Europe, Colombia, or Asia where they can get these banned cures.

In one terrible example, a group of parents wanted a drug to fight Duchenne multiple dystrophy, a disease which afflicts 500 boys a year, crippling them for life at an early age and ultimately leading to premature death.

A new drug was proven to help in these cases, but the board members of the Food and Drug Administration (FDA) on a split vote rejected sale of the drug to open market.

Parents pleaded, hysterical and distraught, that the federal government would not allow this new treatment to the families.

Why would these medical professionals reject the release of this drug?

The FDA has stricter rules, including massive trials and testing for the drug.

Yet what happens when a drug is a treatment for a rare disease, and the number of possible trials is too limited to quality a drug for general sale?

This rule and many others expose how ineffective the federal bureaucracy can be.

Instead of saving lives, the limiting rules of federal agencies like the FDA can actually prevent quality care and even cut lives short!

In the 19th Century, the federal government created the FDA to ensure quality consumer goods and medications for the general public. And typical of a bureaucracy, it’s become ineffective, backwards, and arrogant.

Today, the benefits and needs of our modern economy have changed the concerns we need to face.

The market-based system of providing quality products ensures that companies will sell a proper good or service. The sharing economy and social media have made it easier for prospective consumers to know what to buy … and what to avoid.