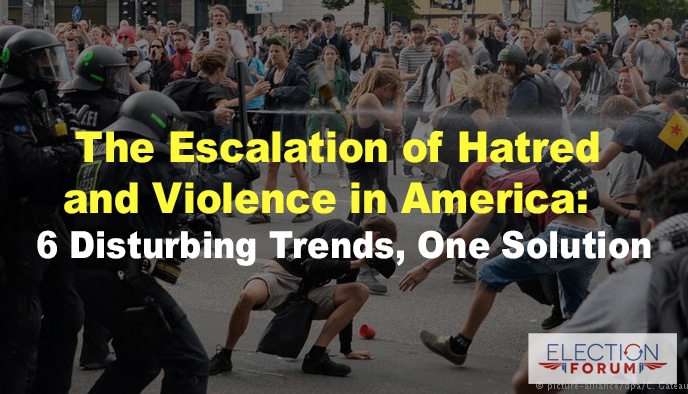 American society today seems to be progressing rapidly into a culture of hatred, violence, and destruction of values, morals … and even lives.

Instead of having respectful discussions and civil debate about differences of political and religious beliefs, we’ve seen:

It’s not just political violence and threats of violence that are spiraling out of control … as we’ve witnessed just in the past few days with the horrific massacre of Jews conducting a ceremony in a Pittsburgh synagogue.

They were killed by a deranged anti-Semite simply because they were Jews.

Here are 6 disturbing societal trends you should be aware of … and the solution:

Hatred resides in every human heart. No one is completely free of it. There are no exceptions…

It’s in the part of us that theologians refer to as the “sin nature.”

Most of the time our inner hatred is kept in check by our conscience and by the restraints of traditional societal and cultural behavior norms.

But culturally acceptable behavior norms can be negatively influenced by what is seen and heard in entertainment, news reporting, on social media, and more.

Jeremiah 17:9 tells us, “The heart is more deceitful than all else and is desperately wicked. Who can understand it?”

And Jesus said, “For from within, out of the heart of men, proceed the evil thoughts and fornications, thefts, murders, adulteries, sensuality, envy, slander, pride and foolishness. All these evil things proceed from within and defile the man.” (Mark 7:21-23)

The first murder – of Abel by his brother Cain – was the result of Cain’s hatred of both God and Abel … because God accepted Abel’s sacrifice but not Cain’s (Genesis 4:1-8)

There are many factors contributing to the growing hatred of the Jewish people within the U.S. – especially among the younger generations. A few of them are:

The anti-Defamation League (ADL) reported that the number of anti-Semitic incidents in the U.S. rose 57% in 2017 – the largest single-year increase on record.

But killing Jews around the world has been a normal occurrence throughout history.

Laurie Cardoza-Moore, founder of Proclaiming Justice to the Nations (PJTN) – a nationally recognized group that confronts anti-Semitism in America – noted this following the synagogue shooting:

“History has shown that anti-Semitism doesn’t stop with the Jewish community; this hatred will soon be directed at other people of faith as well.”

Replacement theology is a heretical teaching that the Christian church – beginning in the first century – replaced Israel as God’s chosen people … and that God is finished with the Jewish people.

A growing number of Christian pastors and church leaders are teaching and spreading this false doctrine.

A simple reading and plain-text understanding of the entire 3 chapters of Romans contradicts the ideas of replacement theology.

All media reporting that includes commentary – especially commentary that claims or implies a motive for words or actions – is biased.

While media bias exists with both conservative and progressive news commentators, over 90% of all mainstream media’s coverage of President Trump – ever since his surprise election – has been negative. This is unprecedented in modern politics.

Much of the progressive news bias is subtle and goes unnoticed by most who listen to it. For example:

The media also supports and promotes acts of hatred by what it does NOT report.

It’s a little-known fact that some 40 acts of violence or threats of violence against President Trump and his supporters occurred in the month of October alone.

Hatred, and the evil acts it produces, are often blamed on one’s environment … or on one’s problematic upbringing…

But as pointed out in #1 above, evil began very early in human history … when the environment was perfect.

The evil we see in America today would be much worse were it not for the restraints of law, justice, and the remaining remnants of our Christian culture.

America is defined by our founding principles in the Declaration of Independence and the Constitution – not by the evils committed by spiritually fallen leaders and citizens.

We shouldn’t be surprised at the epidemic of evil we are seeing today. It’s perhaps a sign that we are either in the last days – or approaching the last days.

Remember the words of the apostle Paul in his 2nd letter to Timohy:

“But realize this, that in the last days difficult times will come. For men will be lovers of self, lovers of money, boastful, arrogant, revilers, disobedient to parents, ungrateful, unholy, unloving, irreconcilable, malicious gossips, without self-control, brutal, haters of good, treacherous, reckless, conceited, lovers of pleasure rather than lovers of God, holding to a form of godliness, although they have denied its power…” (2 Timothy 3:1-5)

There is only one solution to the problem of hatred and evil: Forgiveness and Repentence.

Hatred and evil are not national problems for a nation such as ours, whose national government exists only by the consent of its citizens.

Hatred and evil are personal problems that impact democratic nations only when a majority of their citizens refuse to exercise forgiveness and repentance.

What do I mean by this?

We need to forgive those who have demonstrated hatred toward us personally … and who have committed evil acts against us personally.

And we must repent of our own hatred and evil acts that we’ve committed against others.

Our national government leaders should do the same, setting an example for the rest of the country.

But forgiveness and repentance can’t be imposed through legislation or executive order … obviously. They are matters of the heart.

As Greg Laurie said recently at the SoCal Harvest Crusade, “The heart of the problem is a problem of the heart.”

A top-down approach to national evil is – and always will be – inadequate.

We need a bottom-up approach in which individuals draw upon the power of God in their personal lives to forgive and repent.

5 Comments on “The Escalation of Hatred and Violence in America: 6 Disturbing Trends, One Solution”