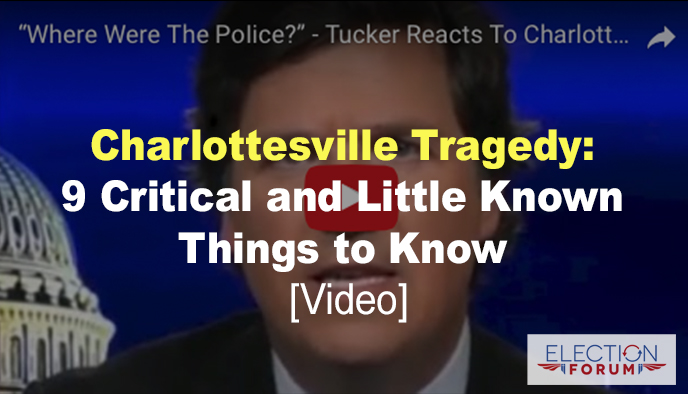 A new wave of unrest created by a handful of evil people.

Plus, a lot of distortion, media lies, Facebook myths and misunderstanding is out there.

As a Christian, I am so upset and in pain over this tragedy in Charlottesville.

Our brothers and sisters in Christ who are black, I want to say I am so sorry this has happened.

The KKK/Nazi supporters could only get less than 200 haters nationwide to join their cause. But it has one too many.

The evil collectivist ideology of racism, white supremacy and Nazism that is unbiblical and anti-freedom – using the power of government to compel their hate on others.

Hate is not just festering in their hearts, it’s now being proclaimed worldwide, beyond their greatest expectations.

So, let’s put it all into perspective.

Here are 9 critical … little known … things every Christian should know:

It’s clear in Scripture, our standard is not hate or bigotry. It’s love. Galatians 3:28 reminds us, “There is neither Jew nor Gentile, neither slave nor free, nor is there male and female, for you are all one in Christ Jesus.”

We are all equal in God’s eyes. All sinners. All Christians, no matter what color, saved by grace, nothing we do ourselves.

Racial reconciliation is the knowledge that all human beings are made in the image of God. To declare war on a race of people is akin to declaring war on our Creator.

“I asked the guy in charge, ‘Where are you going?’ and he said they’re leaving, it’s too dangerous. They had an opportunity to nip this thing in the bud and they chose not to,” recounted the newsman.

The situation could have all been prevented at the start.

On Monday, he clearly said he condemns the violence, naming white supremacists, Nazis and the KKK.I wish it was that clear on Sunday – but the President does not have a communications director.

That’s nonsense and is totally untrue.

The followers of David Duke are small and insignificant. But this event sadly created a massive platform of recognition for their hate. In fact, the liberal media, including CNN, MSNBC, CBS, and others have given them millions of dollars of free publicity and new hateful recruits.

The media focus: Attack Trump relentlessly, not the hateful groups.

Daniel prayed in a pagan country for a true heartfelt change. I pray that the evil that happened in Charlottesville ends. Romans 8:28 reminds us, “And we know that all things work together for good to those who love God, to those who are the called according to His purpose.”

We must recognize we can do nothing on our own, that we need God’s divine guidance in our lives, that “Greater is He who is in us than he who is in the world.” (1 John 4:4).

We must start by accepting the fact that we are all made in God’s image, that we all have a propensity for sin and violence, and that we need the healing balm who is Jesus Christ to bring a divided nation together.

God’s Word in Ephesians 4:31 tells us to “Get rid of all bitterness, rage and anger, brawling and slander, along with every form of malice.” Only then can we begin to see others as fellow human beings.

I am convinced that without the healing power of God, our nation is doomed to a growing hatred, unrest and disunity.

Watch this powerful 7-minute video that brings to light some painful truths about Charlottesville … and asks the question “Where were the police?”

Here is an awesome prayer for Charlottesville tragedy — join in.

Here is another powerful prayer … join in.