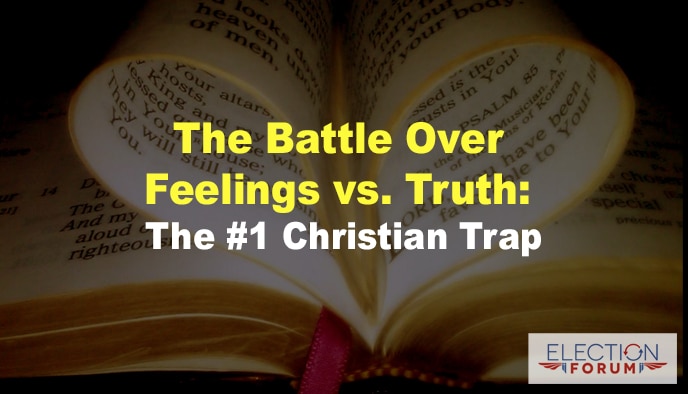 In a recent survey, 60% of Americans agreed with this statement: “Religious belief is a matter of personal opinion; it is not about objective truth.”

Of the remaining 40% of survey respondents:

Evangelicals were the only group in which a majority disagreed with the statement:

For a majority of Americans … and for Western culture ingeneral … objective truth – what is true for everyone whether they believe it or not – exists only in the hard sciences such as chemistry, physics, biology, astronomy, geology, etc.

In the areas of religious belief and the spiritual realm, most people believe objective truth doesn’t exist – only relativism exists.

It diametrically opposes the classical belief – and the Biblical teaching – about truth … which says that truth is a relation between two things:

In other words, truth exists when “the way things are” matches – or corresponds to – “the way I take things to be.”

How does one know for sure “the way things are?”

From an authoritative source…

As Christians, our authoritative source is the Bible – the word of God Himself. The Bible describes all things – God, Satan, nature, the animal kingdom, mankind, sin, salvation, death, judgment – the way they actually are.

If we take all things to be just as they are explained to be in the Bible, then our beliefs, our thoughts, our words and our actions will be based on objective truth, not feelings.

This forms the foundation of a Biblical worldview.

But sadly, a growing number of people – Christians included – begin sentences with, “I feel like…” and then state a belief.

Christians from Biblical times to today who have been tortured and martyred for their faith have never said, “I feel like I believe in Jesus” before they were murdered.

Tragically, for many evangelicals, the relativistic culture in which we live is more influential in their lives than the word of God.

Relativism … and also naturalism – the belief that only physical things exist – form the foundation of a secular worldview.

More than half of evangelicals – 51% — believe God “accepts the worship of all religions, including Christianity, Judaism, and Islam.” This despite the clear declaration of Jesus: “I am the way, and the truth, and the life. No one comes to the Father except through Me.” (John 14:6)

Jesus also declared that the church – the “called-out ones” –would be built on the recognition that He is “the Christ, the Son of the living God,” and that the gates of hell would not be able to with stand the assault of those who built their lives upon that truth (Matthew 16:16, 18).

It’s not surprising that the community of Christian faith in the 21st century is increasingly fractured and less stable than in previous centuries … when so many have lost sight of the foundation of their faith.

3 Comments on “The Battle Over Feelings vs. Truth: The #1 Christian Trap”