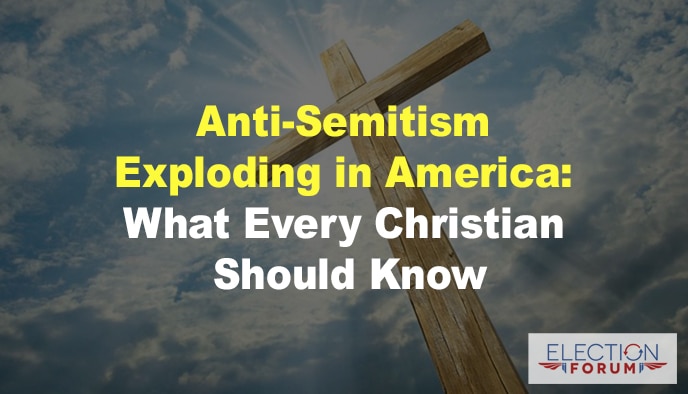 There is no denying that an alarming rise in anti-Semitism is taking place in the U.S. There’s no disagreement about that.

There is a dispute, however, over what’s causing it.

They blame his rhetoric … and they even go so far as to accuse him of being anti-Semitic himself.

During intermission of a performance of Fiddler on the Roof at a theater in Baltimore, a man extended his arm in a Hitler salute and yelled “Heil Hitler, Heil Trump!”

The media initially reported that the man was a Trump supporter … but under police questioning he confessed to being a Trump hater.

To set the record straight – and correct some fake news – here are 6 facts you should know about ant-Semitism in the U.S. … and around the world.

Examples of the infiltration of anti-Semitism into U.S. public schools is so prolific that a separate article needs to be written on this topic alone.

The ruling dynasty of Qatar invests millions of dollars of its massive oil profits to promote its political and theological ideology around the world – including in American K-12 public schools.

Qatar channels funds through its Qatar Foundation International (QFI) directly to public schools … and to teacher training organizations … and provides curriculum on the history of the Arab-Israel conflict.

Students are indoctrinated with the Palestinian perspective only:

The U.S. media regularly portrays the Israelis as an occupation force in Palestinian territory.

For example, the construction of 100 apartments in a Jewish settlement is always a major news story…

The smuggling of 100 rockets into Gaza by Hamas is – with rare exception – not news at all.

They work tirelessly to undermine President Trump’s agenda … and spread anti-Semitism within the federal government and elsewhere.

The State Department sent U.S. government funds – taxpayer dollars – to an anti-Netanyahu group in an attempt to defeat him in the last Israeli election.

I talk about “Obama’s army” of Senior Executive Service Presidential appointees in Chapter 2 of my book, The Deep State: 15 Surprising Dangers You Should Know. You can order the book here.

The anti-Defamation League (ADL) reported that this was the largest single-year increase on record.

Some of the worst mass killings of Jews:

A prominent leader of a group that confronts anti-Semitism in America notes that history has shown that hatred against Jews soon spreads to hatred of other people of faith as well.

The media wants you to forget that:

The progressive media describes the Trump administration’s approach to anti-Semitism as “controversial” … and worries that it will stifle free speech.

2 Comments on “Anti-Semitism Exploding in America: What Every Christian Should Know”