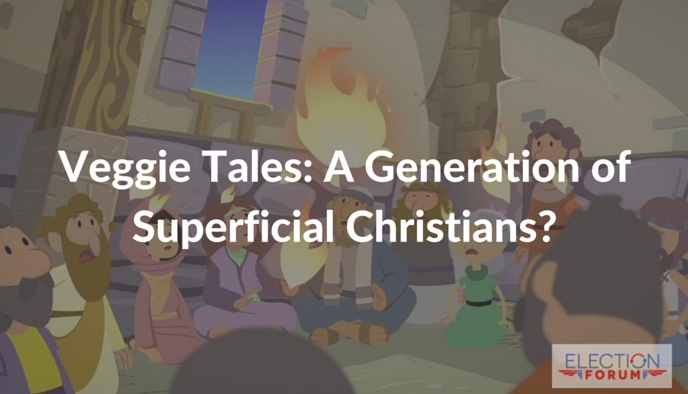 Remember Veggie Tales? These films were a smashing success among Christians – most know them and even remember the songs.

Many kids, parents and grandparents have fond memories of Veggie Tales. They were like Sunday school on film.

All my kids watched and loved them. We sang the songs together in the car…

But the creator of Veggie Tales, Phil Vischer, regrets them.

He said he got caught up leading the successful films and never realized his original vision for them, which was to go beyond fun Bible-story films. His original intention was to go deeper.

Until he realized: “Wait a minute, did I just spend 10 years persuading kids to behave Christianly without teaching them Christianity?”

So Vischer started another project in 2010 – one that is all about taking kids deeper. It’s called “What’s in the Bible?” and it’s a 13-part DVD series about a character Buck Denver who teaches kids Christianity and the Bible in detail.

Now, Vischer is working on a series called “Galaxy Buck,” which uses puppets to teach kids.

Vischer is concerned that, too often, Christian leaders short-change kids. He believes kids are capable of understanding much more than we give them credit for.

The results? We’re afraid of going deep with kids and “we end up with superficial adults.”

There’s too much at stake to be superficial with what we teach kids. Vischer says: “I’m very intentionally trying to push kids. I would rather go too deep and lose some, than raise another generation of superficial Christians.”

Parents have admitted that even they are learning from the shows.  This time, Vischer’s not losing sight of his vision.

Here’s a trailer for the upcoming “Galaxy Buck:” watch here.

3 Comments on “Veggie Tales: A Generation of Superficial Christians? [video]”