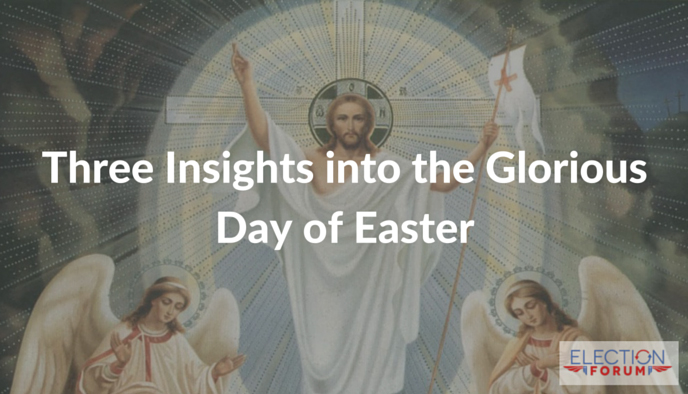 Here are some blessed insights into Easter Sunday:

“When I survey the wondrous Cross,

On which the Prince of Glory died,

My richest gain I count but loss,

And pour contempt on all my pride.” – Isaac Watts

“I am trying here to prevent anyone saying the really foolish thing that people often say about Him: I’m ready to accept Jesus as a great moral teacher, but I don’t accept his claim to be God. That is the one thing we must not say. A man who was merely a man and said the sort of things Jesus said would not be a great moral teacher. He would either be a lunatic — on the level with the man who says he is a poached egg — or else he would be the Devil of Hell. You must make your choice. Either this man was, and is, the Son of God, or else a madman or something worse. You can shut him up for a fool, you can spit at him and kill him as a demon or you can fall at his feet and call him Lord and God, but let us not come with any patronizing nonsense about his being a great human teacher. He has not left that open to us. He did not intend to.” – C. S. Lewis

“I still can’t help wondering how we can explain away what to me is the greatest miracle of all and which is recorded in history. No one denies there was such a man, that he lived and that he was put to death by crucifixion. Where … is the miracle I spoke of? Well consider this and let your imagination translate the story into our own time—possibly to your own home town. A young man whose father is a carpenter grows up working in his father’s shop. One day he puts down his tools and walks out of his father’s shop. He starts preaching on street corners and in the nearby countryside, walking from place to place, preaching all the while, even though he is not an ordained minister. He never gets farther than an area perhaps 100 miles wide at the most. He does this for three years. Then he is arrested, tried and convicted. There is no court of appeal, so he is executed at age 33 along with two common thieves. Those in charge of his execution roll dice to see who gets his clothing—the only possessions he has. His family cannot afford a burial place for him so he is interred in a borrowed tomb. End of story? No, this uneducated, property-less young man has, for 2,000 years, had a greater effect on the world than all the rulers, kings, emperors; all the conquerors, generals and admirals, all the scholars, scientists and philosophers who have ever lived—all of them put together. How do we explain that—unless He really was what He said He was?” – Ronald Reagan

Please share your thoughts with me! Email me at [email protected]

2 Comments on “Three Insights into the Glorious Day of Easter”