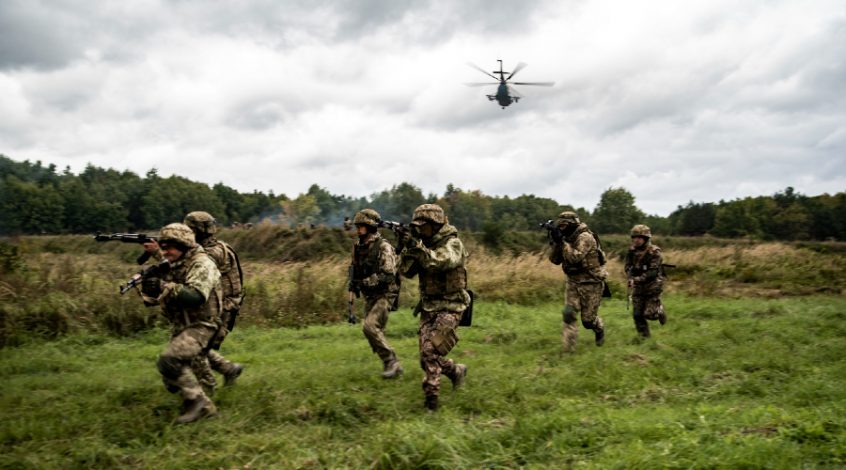 There is a spiritual battle waging in the Ukraine.

But most Christians don’t know about the church, Christians and the religious/spiritual conflict going on.

President Biden opened the door to Russian invasion because of his humiliating defeat in Afghanistan and his failure of leadership in displaying strength and determination.

It’s been a tragic political theater of mistakes, blunders, and appeasement.

But behind the chaos, bloodshed, and devastation – Christians and those opposed – facing “religious” opposition is at work.

And there is a lot of deceit and misinformation.

But God is at work also.

Reality #1: Christianity vs. Religion – The Russian orthodox church is at war with the Ukrainian Orthodox church and evangelicals.

For over 10 years, the Russian Orthodox Church has used Vladimir Putin and the Russian Government to restrict evangelical Christians, crusades, church services, evangelism and much more.

The mission of the Russian Orthodox Church has been to destroy evangelical Christianity as well as other religions that competes with it – all with the help of Vladimir Putin.

It lost around 40% of its membership, influence, and revenue.

Thy want to control more, not less.

And they hate that the Ukrainian Orthodox church is not trying to silence evangelicals.

And this invasion is a way for it to bring the Ukrainian Orthodox Church back under its rule.

The relationship between Putin and the Orthodox church has been unusual and very close.

Reality #2: Christianity vs. Religion – Vladimir Putin has a special relationship with the Russian Orthodox church.

Vladimir Putin talks about prayer, about religious values, wears a cross, and is seen as a very devout Russian Orthodox believer.

In a sense, the Ukrainian war is a religious war to uphold the moral values dictated from the Orthodox Russian church against the westernization of Ukraine and the many Russians that are there.

What Kirill says to Putin is probably what Putin will do.

During a recent sermon, Patriarch Kirill said that the Ukraine was engaged in the extermination of Russians in the Ukraine, and he described the war as a spiritual struggle against the West “so-called values”.

Putin – the day before his unjustifiable invasion – tried to justify it.

This is not a new thought.

It goes back to 988 A.D. when the prince of Russia was baptized by Byzantine missionaries.

Since then, religious history overlapping the Ukraine and Russsia was baptized by Byzantine missionaries.

Since their religious history overlapping the Ukraine and Russia was a powerful influence.

History was completely disrupted when the Communists came to power in Russia in 1917.

The persecution of Christians was intense, including the mass murder of a thousand believers.

In 1991, with the collapse of the Soviet Union, the church again became strong and evangelism boomed.

Sadly, the close relationship of both the Russian and the Ukrainian Orthodox churches have become political allies to their respective governments.

Patriarch Kirill said before the invasion, “God forbid that those evil forces that have always fought against the unity of Russia and the Russian church prevail.”

Reality #3: Christianity vs. Religion: The religious community is putting pressure on Patriarch Kirill to stop the war.

The religious leaders across the world have contacted Patriarch Kirill, urging him to withdraw his support for the invasion.

In addition, those in the Russian Orthodox Church have also worldwide moved to ask for a reversal policy.

280 priests and deacons of the Russian Orthodox Church called for reconciliation and an immediate end to Russia’s ongoing invasion of Ukraine stressing that, “The Last Judgement awaits all”.

They went on to say, “We mourn the ordeal to which our brothers and sisters in Ukraine are undeservedly subjected.”

More than 400 ministers of evangelical churches in Russia signed an open letter against the invasion of the sovereign Ukraine.

They said, “Evangelical Christians have been unanimous in condemning the war.”

It said, “Our army is conducting full scale military operations in another country, dropping bombs and rockets on the cities of our neighboring Ukraine. As believers we assess what is happening as a grave sin of fratricide, the sin of Cain, who raised his hand against his brother, Abel.”

Reality #4: The American Church in Action

Churches across America and pastors are urging their people to pray and help send contributions.

For example – Conduit Church in Franklin, Tennessee – the small fellowship raised over $50,000 for relief along the border.

I was recently on a podcast with a leader in reaching out to refugees and he was explaining how throughout the borders, churches have opened their doors, and evangelical organizations have come to help.

Organizations that are helping include the Slavic Gospel Associations, Samaritan’s Purse, small ministries, and individual Christians are all there to share the gospel – to provide food, water, and comfort, to be able to give them guidance and direction of where to stay.

And they are there spreading the gospel.

It is an amazing effort reaching out to over 3 million refugees.

We need to pray for these frontline volunteers working hard for the love of Christ and pray for the hurting refugees.

Indeed, we need to pray that what Putin and the Russian Orthodox church leadership has meant for evil, God would turn to good.

Reality #5: The American Church at Work: What You Can Do

I encourage you to do the following:

One of the organizations I mentioned was through Conduit Church.

You can donate like to Conduit and they will make sure 100% of the money is spent directly on the frontlines in helping the people and to present the gospel.

Click HERE to donate and mention “Fund for Ukraine”.

Or go ahead and send it to Samaritan’s Purse. Click HERE for the donation portal.

Reality #6: The Spiritual War and Prophecy

Without a doubt, a spiritual war is going on and we need to be people of prayer.

The fulfillment of prophecy – the end times are here.

While we don’t know the time or the hour, what we do know is that the time is urgent for all of us to share the love of Jesus, to present the good news of salvation and a personal relationship with Jesus Christ, because of his death on the cross and resurrection for the dead.

5 Comments on “The Ukrainian War: Christianity vs. Religion – 6 Little-Known Realities Every Christian Should Know”