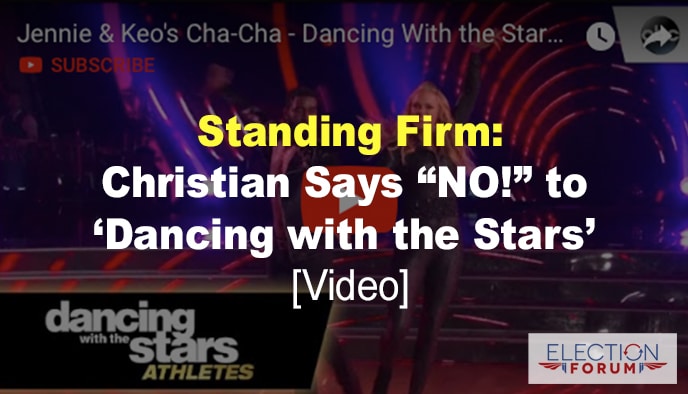 On a recent ‘Dancing with the Stars’ episode, former professional softball player Jennie Finch-Daigle was asked to dance to the song “Make Me Feel” with her partner Keo Motsepe.

The Janelle Monáe song is full of suggestive lyrics about bisexuality…

It’s even been called a “bisexual anthem.”

The song was assigned to Jennie and Keo by the producers of the show.

But Jennie is a Christian … she wants to be a positive role model for her fans … and set a godly example of behavior for her 3 children – and for all the young girls who look up to her as one of the greatest softball pitchers to ever play the game.

In a phone call in the middle of the week, she told the producer that she couldn’t dance to such a “risqué” song.

The producer allowed her to choose a different song … but that left only 3 days to learn and rehearse completely new choreography.

She explained to Keo, “I need to follow who I am and stand up for what I believe.”

Jennie later told reporters, “I want to glorify God out there…”

In spite of the song change … and having so little time to polish the new choreography … Jennie and Keo performed the Cha-Cha well enough to advance to the next round of the competition.

Watch this 7 ½-minute video of Jennie and Keo’s Cha-Cha rehearsal and performance during Week 2 of this season’s Dancing with the Stars:

Watch this 6-minute interview with Jennie and Keo after the first week of this season’s Dancing with the Stars:

10 Comments on “Standing Firm: Christian Says “NO!” to ‘Dancing with the Stars’ [Videos]”