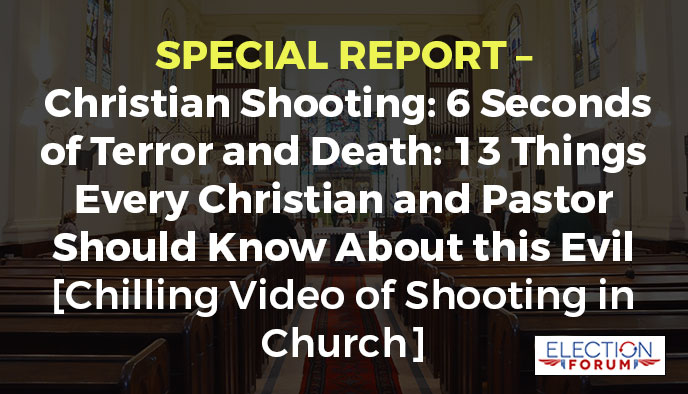 For 6 seconds, 240 Christians who were gathered for worship, communion, and the word of God were terrified for the lives of their families and children.

Here are 13 things you should know about the shooting. I encourage you to watch the chilling video at the end of this report.

1. The massacre was limited thanks to church members who had guns in church.

The deadly killing of two church goers could have been dozens, maybe hundreds. But Jack Wilson (71) acted quickly and shot dead Thomas Kinnunen (43) before he could kill others.

In 6 seconds, the killer shot two and moved toward the church podium – but was killed as Wilson and a half-dozen others pulled their guns.

2. The church members had guns because Texas passed a Licensed to Carry (LTC) law in 2019.

The law allows innocent people to live because guns save lives.

3. The killer knew the church.

He had been to the church a few times before to receive food. He was angry the church didn’t give him money.

The killer had a long arrest record, including aggravated assault with a deadly weapon, theft, arson and more.

His motive for the shooting is unknown…

When he entered the church, he was wearing a fake beard, a wig and hat, a long coat – and he had a shotgun.

4. Forgiveness and God’s love were displayed in the aftermath of the shooting.

After the killing, the pastor and members of the church proclaimed God’s love, mercy, and grace … giving thanks to Jesus Christ and the cross.

They have no idea how the gospel was spread because of this tragedy.

Around the world, the media, including TV, was showing video of last week’s church service, interviewing Christians and showing people of faith praying and worshipping God. Wow!

For example, nationwide – even worldwide – people watched as the pastor and members of the church declared their faith.

Tiffany Wallace proclaimed, “I forgive him, and that’s the hardest thing to say.” Her dad was murdered before her and her sons’ eyes in church.

She said, “He was amazing. He was a godly person, and even when we talked about going to heaven. he always said, ‘I’m always prepared.’ But you never thought this would happen.”

“He is a hero to me, and I appreciate him,” she said. “I’m glad everybody’s okay. I know my dad is up there with his sister, his parents, in a wonderful place. Not in pain anymore… He’s just in peace now. I know he’s in good hands.”

“You just wonder why. How can someone so evil – the devil – step into the church and do this?”

The media coverage has shown the power of Jesus Christ and the truth found in Romans 8:28…

5. Guns save lives every day.

Across America in homes, businesses… and churches… guns help stop violence and killings. Its estimated over 1.2 million times a year, private citizens do what the police can’t do in protecting life.

6. Immediately after the killing the politicians and biased media used the horrific attack to call for gun control.

“It’s irrational. With all due respect to the Governor of Texas, its irrational what they’re doing… And we’re talking about loosening access to have guns? Being able to take them into places of worship, store them in schools? It’s just absolutely irrational,” Biden said.

But the Pastor disagreed. He said:

“We lost two great men today, but it could have been a lot worse. And I am thankful that our government has allowed us the opportunity to protect ourselves,” Farmer said.

As Christians, we recognize prayer is an act of obedience to God and His will for us to communicate with the true and living God.

Prayer is not controlling God according to our will. It’s based on a personal relationship with Jesus Christ. He is the victor over evil and He is the comforter of the hurting.

The reality is, it’s not gun control that is going to stop this type of violence. It’s revival – revival for God in the hearts of men and women across America.

8. This is a wakeup call to the Church and to Christians.

Churches are vulnerable and need to step up security. They need to have security plans in place at each church … with armed and trained members there to protect the innocent.

As one security analyst said, the Left believes you can legislate evil out of people’s hearts, but you can’t. Don’t be sheep. Be vigilant. We live in a different world today. We are commanded to defend ourselves.

“Rescue the weak and the needy; deliver them from the hand of the wicked” (Psalm 82:4)

Churches are under attack. Shootings at churches have become so common that authorities have created a National Church Shooting Database.

It’s a fact that every church is considered a soft target by:

Churches are at greater risk for harm than ever before. Meeting times are posted, and anyone is welcome. Most church buildings have multiple points of access. Few churches have security personnel or policies in place.

Some congregations resist employing security guards, worrying that they will frighten children and distract from worship. But the church duty is to protect everyone.

Many Christians are afraid to go to church again. That is what the enemy wants. Don’t let demonic attacks impact church attendance. We gain strength through fellowship with our brothers and sisters in Christ. As Psalms 46:1-2 reminds us:

God is our refuge and strength, a very present help in trouble. Therefore we will not fear though the earth should change, though the mountains be shaken into the midst of the seas.

12. The persecution of Christians should not be a surprise.

Did you know the same week as the Texas church shooting, hundreds of Christians worldwide were killed because of their faith in Christ?

Across the world, persecution of Christians is happening – including the Middle East and Egypt, India, Nigeria. One Christian is killed every 30 minutes.

Fear not and trust in the Lord. There are two Scriptures that remind us that following Christ is not without its perils:

“All who desire to live a godly life in Christ Jesus will be persecuted” (2 Timothy 3:12).

Christians are persecuted the world over, yet when it happens here at home, it shocks us into reality.

Why are peaceful and loving Christians under attack, when other world religions are not persecuted as violently?

The answer is simpler than you may think.

It is because Jesus Christ is the Way, the Truth and the Life, and there is no other way to salvation and heaven but through Him.

And Satan knows it. He also knows his time is coming to an end.

It’s time the world knew it, too.

Yes, as Christians we face persecution, but we are not to lose heart in the face of this adversity.

Not only will good always overcome evil, but we live on a promise Jesus gave us:

“Blessed are those who are persecuted for righteousness’ sake, for theirs is the kingdom of heaven” (Matthew 5:10).

13. We should pray for our enemies.

Love overcomes hate. As Christians we are told to:

“Love your enemies and pray for those who persecute you” (Matthew 5:44).

Here’s an interesting video interview of Jack Wilson – a trained volunteer security guard at the church – who engaged and shot the gunman (13 ½ minutes).

4 Comments on “SPECIAL REPORT – Christian Shooting: 6 Seconds of Terror and Death: 13 Things Every Christian and Pastor Should Know About this Evil [Chilling Video of Shooting in Church]”