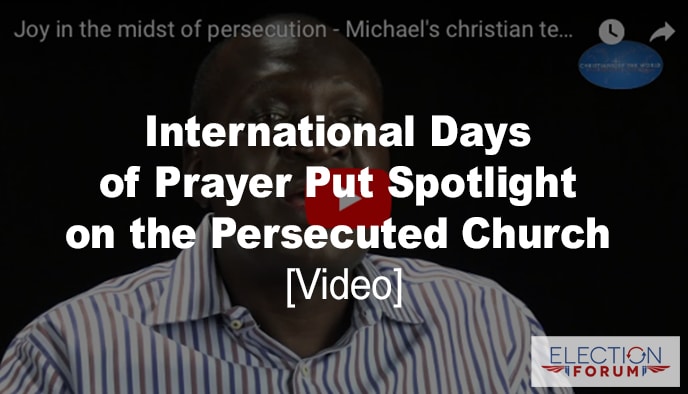 Homes and churches burned down.

Around the world, those who declare their faith in Jesus Christ are subjected to persecution and death daily.

“If one member suffers, all members suffer.”

That is why it is so important we keep the persecuted church in our prayers daily.

International Days of Prayer for the Persecuted Church will be held globally on Nov. 5 and 12, the first and second Sundays of the month.

Churches the world over will have a chance to pray corporately for those being persecuted.

This annual event raises awareness of the persecution and oppression Christians around the world experience for their faith in Jesus Christ.

Just this week I was told of Sudanese Christians, chased out of their country just for believing in Jesus Christ, who resettled in neighboring Uganda.

There are more than 1 million refugees from South Sudan, 85% of them women and children.

South Sudan, which declared its independence in 2011, is on the brink of genocide.

It’s called one of the biggest humanitarian crises in Africa.

The United Nations about 17,000 troops trying to keep the peace, but tribal warfare and ethnic cleansing spreads to new provinces.

Food is scarce, and most villagers are forced to grow their own crops to survive.

Much to its credit, in a corner of an almost all-Muslim country, Uganda has made room for more than 270,000 Christian refugees.

They have given them land, water and working papers.

Others who are helping include:

Hindus have covertly declared war on Christianity, burning homes and churches of Christians.

ISIS jihadists refer to Christians as their “favorite prey.” Christians are being martyred by genocide in Iraq and Syria.

Won’t you sign our petition to save Christians from genocide? You can do so by CLICKING HERE.

And please sign our petition by CLICKING HERE to save Christians from being attacked in India by radical Hindu Nationalists.

Watch this powerful 4-minute video of joy in the midst of persecution through one man’s testimony.