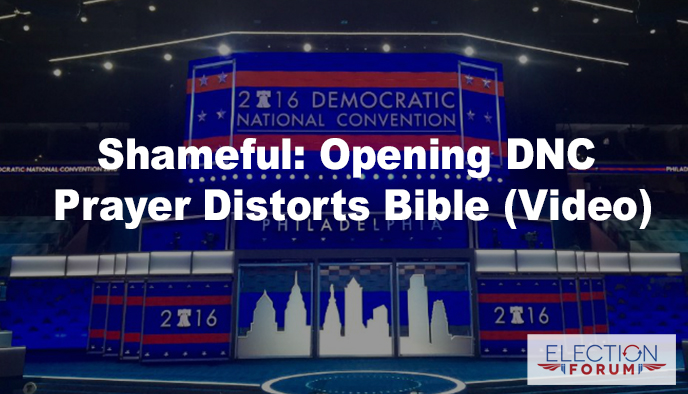 Muslim Imam Abdullah Jaber gave a distorted interpretation of the Bible during his opening prayer before the DNC Convention.

He claimed that the Lord will answer our prayers if we remove oppression.

But how did he define the fight against oppression?

And what about Christian lives, the ones routinely persecuted and now targeted for genocide in Muslim majority countries?

His most offensive comments came afterwards:

“We know of a brown-skinned Palestinian man who was considered a threat but he was nothing but a refugee, right? And that is Jesus.”

Jesus Himself declared who He is and why He came:

“For God so loved the world that he gave his one and only Son, that whoever believes in him shall not perish but have eternal life.” (John 3:16)

Jesus was not a victim of political oppression, but laid down His life to set all men free!

“The thief comes only to steal and kill and destroy; I have come that they may have life, and have it to the full.” (John 10:10)

“To the Jews who had believed him, Jesus said, “If you hold to my teaching, you are really my disciples. Then you will know the truth, and the truth will set you free.” (John 8: 31-32)

Oh … and unlike the prophet Muhammed, Jesus rose from the dead and lives forevermore:

“And what we have said is even more clear if another priest like Melchizedek appears, one who has become a priest not on the basis of a regulation as to his ancestry but on the basis of the power of an indestructible life. For it is declared:

“You are a priest forever,

Check out the video of the Imam and his prayer here: