Should pastors be allowed to speak up on current cultural and political issues?

Since 1954, by law pastors have been silent. Before 1954, pastors often spoke up on political and cultural issues.

They were the voice of conscience on cultural and political issues.

In 1954, Congress passed the Johnson Amendment, which said that churches could lose their tax exemption status if they spoke out on political issues. 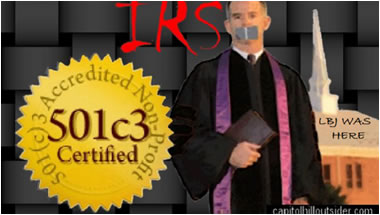 We expect this survey of Christians to receive wide media attention and the results to be studied carefully by America’s elected officials.

It’s time for pastors to take a stand:

Craig Huey will soon be on TV and radio talking about Christian voters and their opinion on this issue.

Question: Should the Johnson Amendment be repealed so pastors can speak out on cultural and political issues, without being afraid of losing their churches’ tax exemption status?

Fill out our poll here.

We will email you the results in one week and publish them in Reality Alert and on www.ElectionForum.org